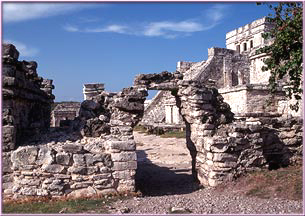 Diving (scuba) the eastern Yucatan Coast from Cancun to Tulum offers some great adventures. Seeing the oddities along this stretch
of the world is also interesting (here’s a two headed turtle at Xel-Ha). But… exploring the Cenotes, the fresh water caverns of the Mayans is an unforgettable experience. *CHECK OUT THESE SHOTS!!

Mr. Cenote himself, Buddy Quattelbaum, has probably explored more virgin underground terrain around here than anyone else. Buddy has charted scores of miles of fresh water filled caves and leads experienced cave divers on expeditions. I was fortunate enough to spend some time underground with him stringing wire into uncharted inky darkness. 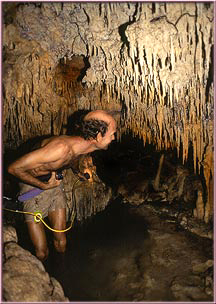 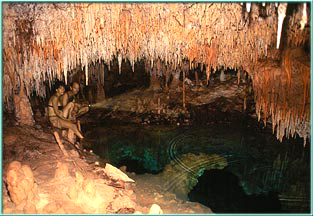 This location is about 400 yards into a cavern where we dove an underground river. The water is running at about 2 knots and is at a constant 79 degrees F and the visibility is limited only by your lights (300’+). Of course the water is fresh, potable, and were it not for our divelights, it would be as black as one can possibly imagine.
While submerged, sinkholes are encountered where one can reach the surface. The majority of the diving is usually between about 20 to 80 feet, however it is not uncommon to find holes going considerably deeper.

The caverns of the Yucatan are evidence of the fascinating subterranean history of this area. Although flooded now, these convoluted systems which run for uncharted miles underground were originally formed dry. The precipitation of calcium carbonate from ground water created the exotic formations, stalactites, stalagmites, flowstone curtains, etc., found within them. The rising sea level, which followed the thawing of the last great ice age some 10,000 to 13,000 years ago, flooded the entire subterranean network and stopped forever the gradual formation of these natural wonders. Frozen in time, this fragile beauty has remained concealed from human eyes through geologic time. This included, of course, the flowering and decline of the Mayan empire (from 2500 to 1540 BC). Mayan myths suggest that they believed spirits dwelled in the caves and that underwater rivers connected major Mayan cities throughout MesoAmerica. Two things are certain, the Cenotes provided continuous fresh water to the Mayan civilization and they were the subject of numerous religious rituals (as evidenced by artifacts found continuously in and around them). 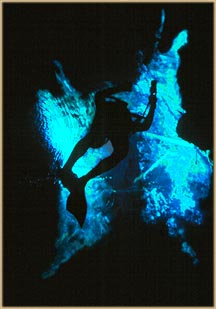 The “front doors” to this extensive underground labyrinth are numerous holes and/or caves found in the jungles, on ranches, in new road cuts, and near old villages that still exist with little connection to the civilized world. Some may be just a round, water filled hole of 5 to 10 feet in diameter. In fact, Vaca Ha is a well for watering cattle. Others, such as Cenote Grande, are larger craters (sinkholes) formed when the shallow roof caved in leaving a jumble of rock debris in the center.
This is not a sport for the novice or faint of heart. Going deep into the caves requires advanced training and experience. However, relatively inexperienced divers can swim/snorkel the surface of some Cenotes and certain operators will allow limited diving into large openings. Perhaps the most well-equipped operator in the area is Aquatech at Villa de Rosa, located at Aventuras Akumal. Tony and Nancy DeRosa have been welcoming hardened cave divers for over 20 years and are extremely hospitable hosts. Tel: 011-52-987-41271.
(more shots and detail later)
Go for it!