Walk about 10 minutes past the Orange Cave along the SE shore and come to a pile of boulders. Scramble through to Sentinel Rock (aka first Cay) and you will see Wave Wall approximately 200 yards further along the rugged shoreline. Continue scrambling eastward under a long overhang for and over dark, sharp rock to reach the climbs. This is a very aesthetic location, peppered with pockets and edges and a great place to begin your climbing experience on the island. Climbs range from 5.8 to 5.12, all terrific lines. Climbs are numbered from L to R as you face the wall. *CAUTION: Watch the wave action and water level. It is easy to get caught out here.

8.) Unsuspecting Remora, 12a, 7/2 plus fixed threads. Goes up a white face streaked with black. It’s steep, challenging with a reachy start with few holds, then to oververtical jugs left of the cave above. Ti (Hirst)

9.) Calico Jack’s Den, 10a, 2/8. Climb to the large cave (Jack’s Den) on buckets, into and out of its right side, and out the right roof with big exposure to an anchor set above. Here Jeff Elison rounds the exposed roof (photo to right).*NOTE: Named “Shooting the curl” by mistake elsewhere!! Ti (Harper) 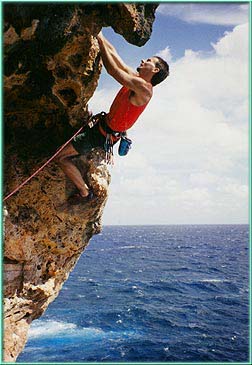