Here is the rather remarkable ‘stage’, located in Central Vedauwoo, truly the ‘Land of the Earthborn Spirit’. 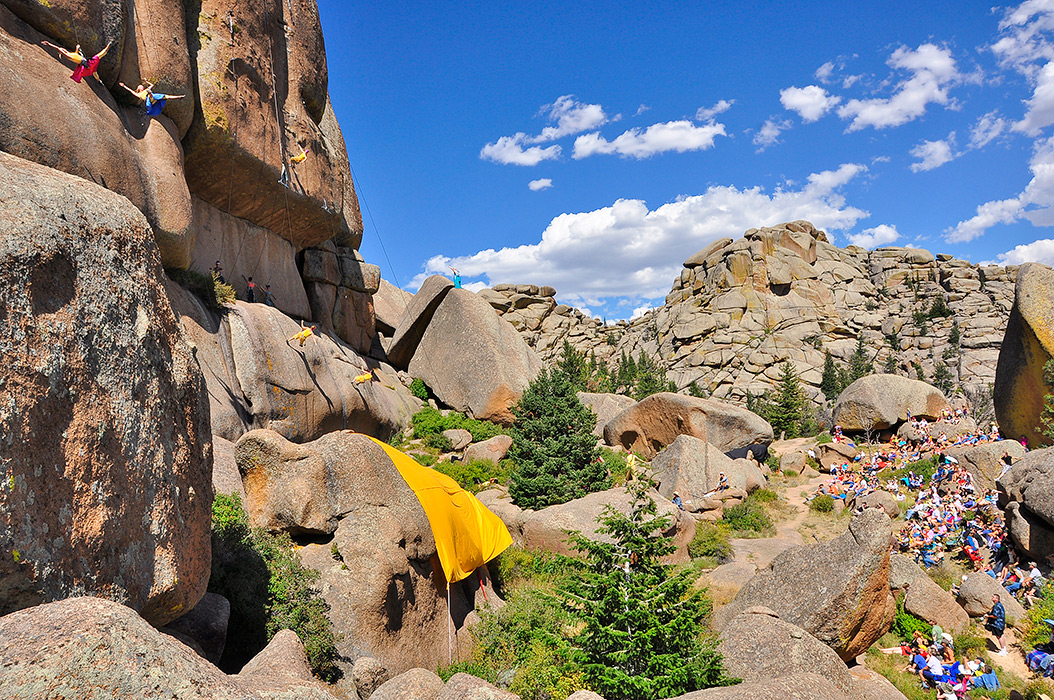 THE HISTORY:  Early beginnings to the present

In 1922, Maybelle Land DeKay, a child prodigy in her own right, and then a Drama and English Professor at the University of Wyoming, found what she was looking for, a perfect natural amphitheatre in a very primitive setting roughly 20 miles east of Laramie. Her vision was to produce a play in the out of doors describing the history of Wyoming, from the cataclysmic birth of its rugged mountains to the coming of civilization. Fascinated with Indian legend and myth of the region, she wanted to give her pagaent an Indian name.

Newspaper articles of the time describe how she sought out the Arapahoe and asked them what their word for ‘earthborn’ was, coming up with “bi-ito’o’wu”. This was then anglicized to “vedauwoo” (now pronounced ‘vee-da-voo’). The pagaent was of rather grandiose scale, containing some 500 fanciful and historic characters and was written in 5 long episodes. ‘Grand Teton’, god of the mountains, was advisor to Vedauwoo, who was smitten with the goddess Wyoming played by his sister Crete (see figure to right), and on it goes. Of course at that time, there were no roads into the area, so oxen-drawn plows were employed to level an access path into ‘Vedauwoo Glen’.

During the play, boulders were rolled down the cliffs to signify thunder and fireworks were exploded to simulate volcanic activity. A live musical score was orchestrated. The original play drew spectators numbering in the hundreds (nearly 1,500 once) from as far away as Denver, Kansas and Nebraska. Despite great enthusiasm, the play was held only twice at Vedauwoo, in 1924 and 1928. It was held indoors at the University two other seasons because of inclement weather. Shortly thereafter, Ms. DeKay was divorced from her husband and was subsequently terminated from the University Faculty, ending what was considered a quantal leap in theatrical production.

As incredible as it sounds today, it was against the law (back then) for a single woman to be employed in a State funded position. Her untimely departure from the University signified the end of the production, but the strange and evocative name derived for the play and used for the area as well remains to this day. 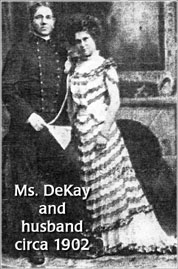 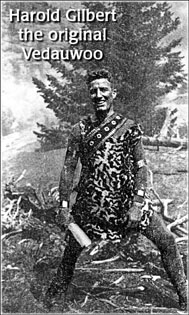 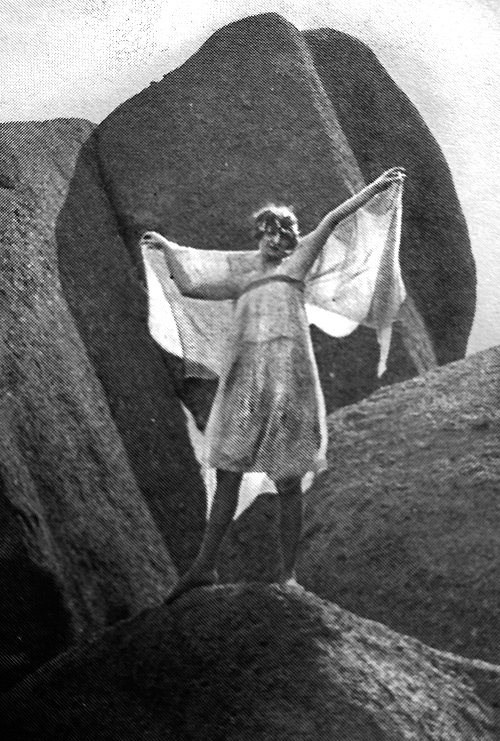 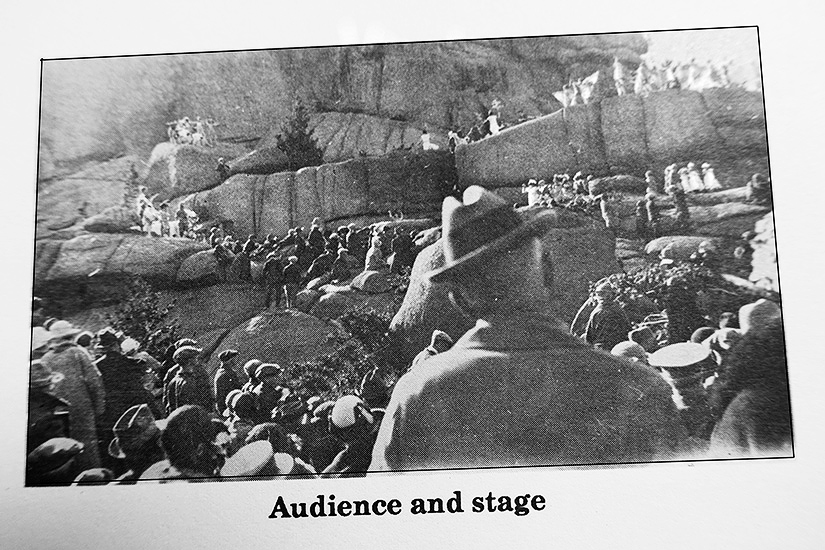 Early in 1997, a spark was rekindled (J. J. and J.W.H) at the University to recreate the pageant with a more contemporary twist. Under the extraordinary and creative leadership of Ms. Rebecca Hilliker, Chairperson of the Department of Theater and Dance, a more modern version of the original play was produced, with inventive choreography by Margaret Wilson. Over the next year, while care was taken to retain much of the original spirit of the play, characters were ‘updated’ to appeal to a more modern audience and an original musical score was written by Kevin Hart. Technical rock climbing and vertical dance techniques were integrated into the script by Neil Humphrey (Prof. of Geophysics) who anticipated suspending several actors/students high on the rocks overhanging the audience where they would perform gymnastic dance routines, creating a rather spectacular supporting theme. Margaret, Neil and ‘Sam’ Wisely are seen in the shot at right striking a pose during a practice session that was snowed out. I was responsible for rigging most of the ropes, setting protection on the vertical walls and overall safety of the production.

The first performance took place in September of 1998 to an audience of over 400 spectators. While moderately successful, it foretold of better things to come. The performance emphasized more aerial improvisation in 1999 and many more tickets were sold. The 2000 performance was based on the new concept of “vertical dance” (somewhat reminiscent of Project Bandaloop) and was performed mostly on the Coke Bottle formation to the west of Fall Wall. The 2001 performance, entitled “Life in the Balance”, occurred on September 9th. A blend of creative acting and dance was performed on the ground, and overhead there was free-floating balletic and gymnastic movement in three dimensional space against a backdrop of Vedauwoo’s highly unusual rockforms. Since then, the Production has evolved into an ‘annual summer event’ at Vedauwoo. In 2009, the audience totaled nearly 1800 and the performance was nominated for the Wyoming Arts Council’s prestigious Governor’s Arts Award. 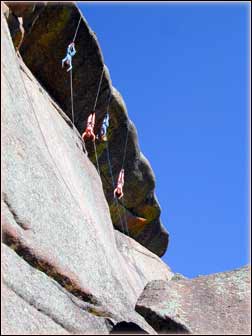 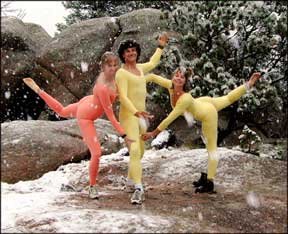 CHECK OUT SOME OF THE ACTION. THIS IS AN IMPRESSIVE SHOW OF UNUSUAL TALENT, REMARKABLE SKILLS AND ABILITY FAR BEYOND NORMAL LIMITS.  IT’S “FLYING IN 3-DIMENSIONAL SPACE”. 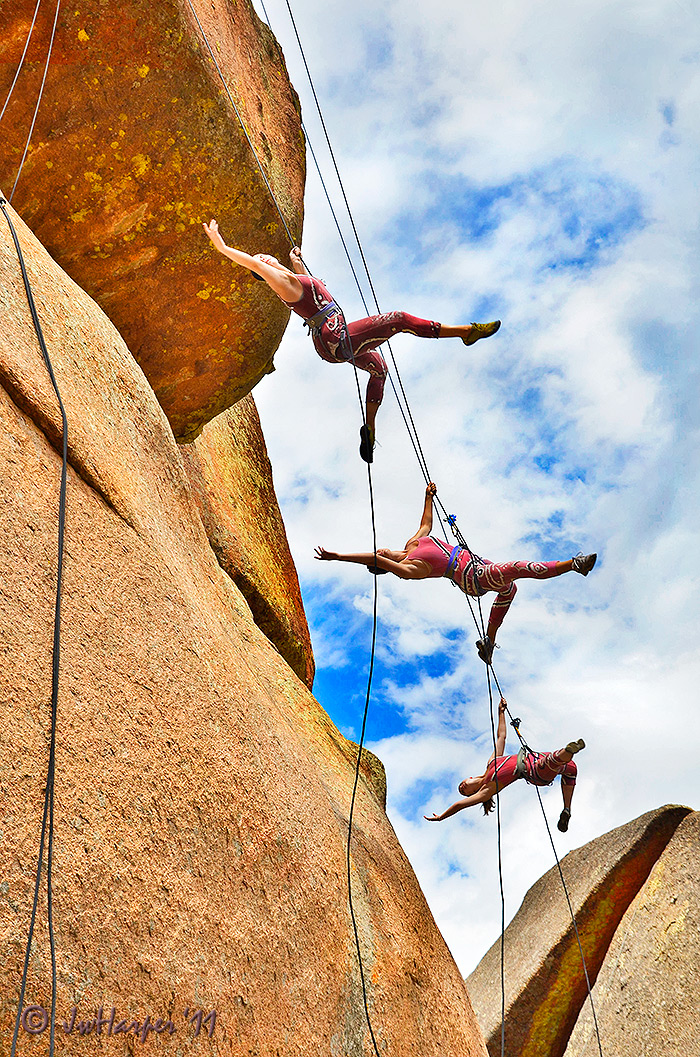 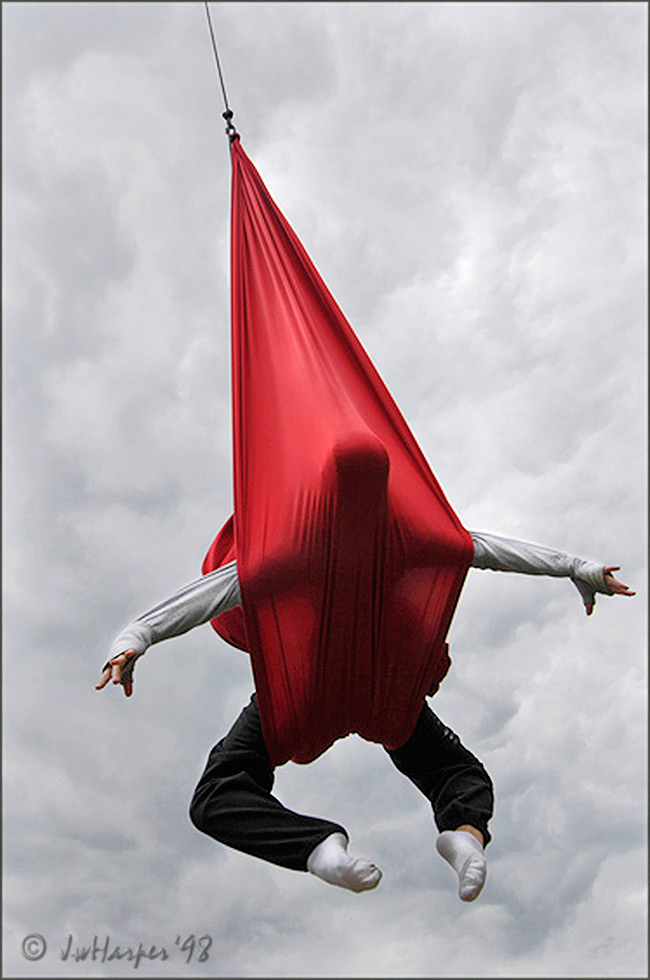 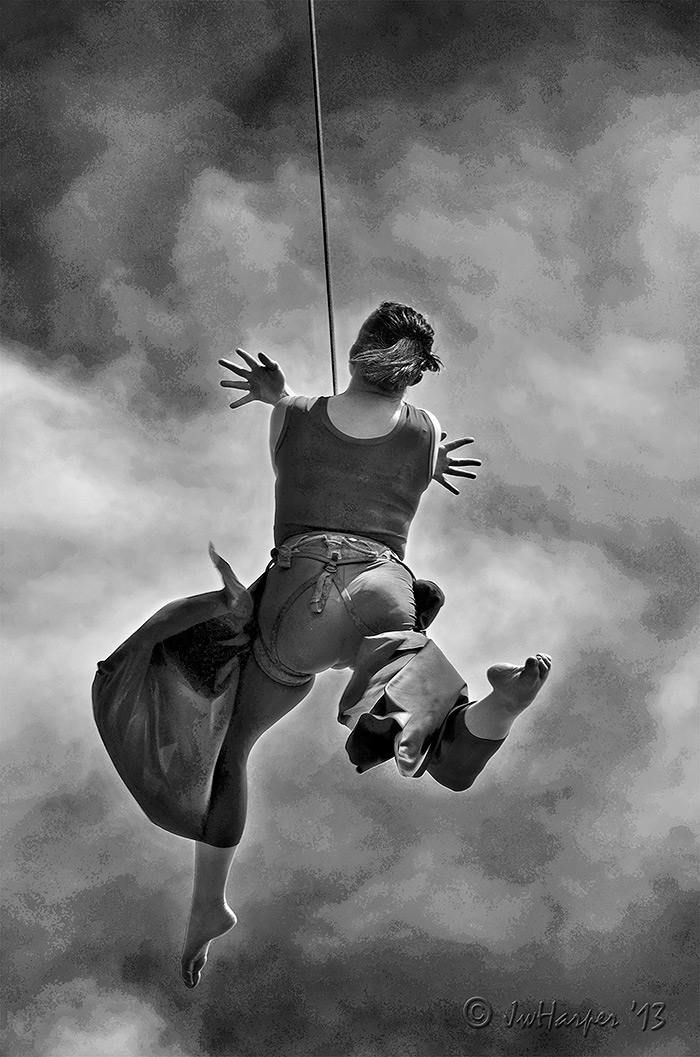 HAVE YOU MISSED IT?

The Vedauwoo Vertical Dance Festival is really something to see if you’re so inclined!! It is a continuing event during the late summer season at Vedauwoo. Contact the Department of Theatre and Dance at the University of Wyoming if you are interested in the academic program, next year’s performance or other details.

Here are a few earlier shots of this very spectacular event! 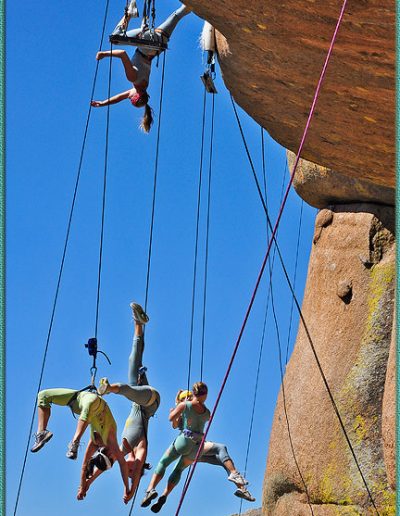 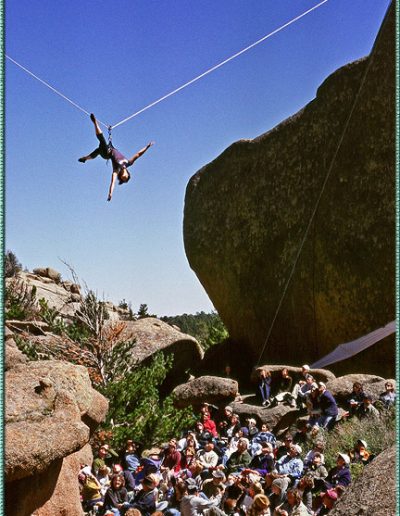 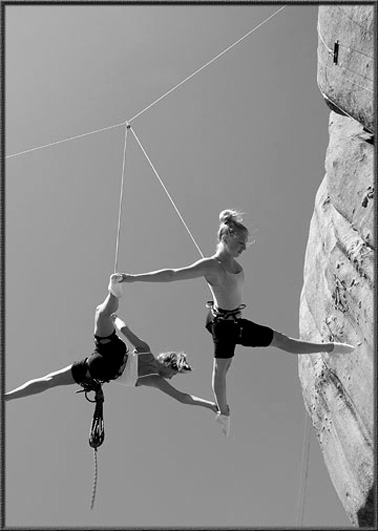 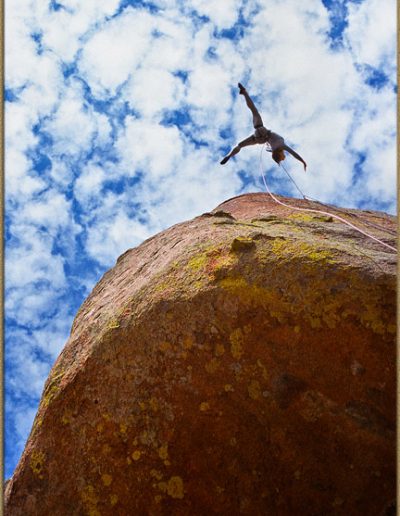 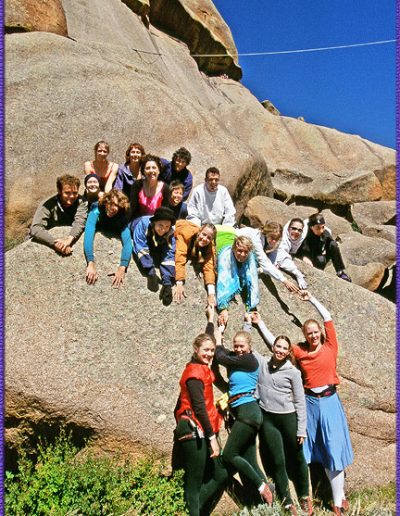 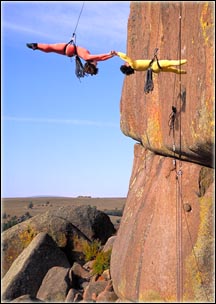 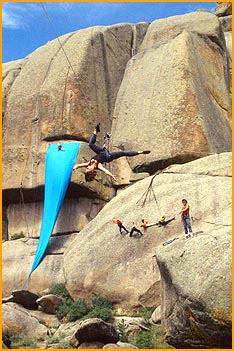 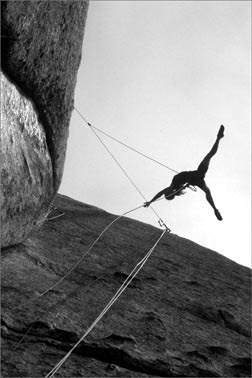 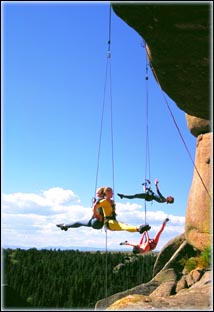 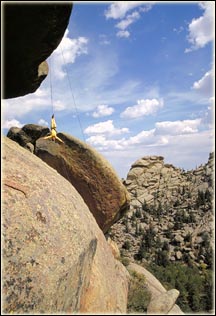 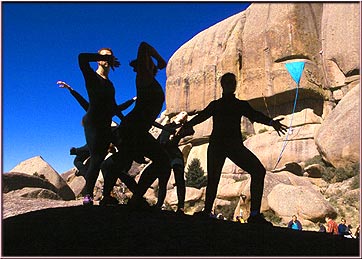 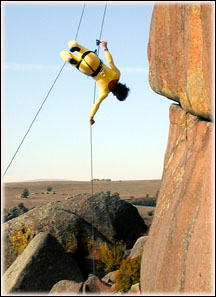 SELECT ANY DATE BELOW TO SEE DETAILS OF THAT PERFORMANCE

Vertical Dance with early beginnings in 1998

Vertical Dance around 1998 HERE ARE SOME SMALL VIGNETTES OF YEAR’S PAST. Unfortunately, the photographic record is a bit 'sparse' in the first couple of years. especially in '98. Obviously we were in experimental times as the venue first began to evolve. More to come...

* The 2001 Performance, “Life in the Balance”, took place on September 9th!! Many said … “it was the BEST YET”, even though we were SNOWED ON. The two large shots are ‘the great Cast’…. and Sam Wisely flying over the audience. Thanks go to Margaret Wilson, Neil...

*2002 An abbreviated, yet technically very skilled version of the Vertical Dance Festival was held . . . ......on the north face of “Blair Three” at Vedauwoo on September first. There was even a night time performance that stunned the audience. INCREDIBLE...

The 2004 Dance Festival took place at the Coke Bottle with some unique additions.   Two leaders of the Alban Elved Dance Company, Karola Luttringhaus and Andrea Lieske from Berlin, Germany were invited to join the cast this year. This well known Group is essentially...

While there was a hiatus in 2005 for various reasons, ” Dancing Between Earth and Sky 2006 “ was held on July 14, 15 and 16, 2006 for abundant audiences. The performance has now been incorporated into the well-known Snowy Range Summer Theatre and Dance Festival. This...

“Dancing Between Earth and Sky 2007” 1) took place on the weekend of August 25th and 26th. Two performances on Saturday and one on Sunday were held at the COKE BOTTLE FORMATION again this year to the accompaniment of live music by PQPB and Friends. The production...

Vertical Dance 2009 A Dreamtime Tale 2009 … was held August 22nd and 23rd, the story narrated by Paul Taylor, choreographed again by Margaret Wilson and Neil Humphrey, with live music including 6 creative musicians and a digeridoo’er. Attendance was at a record high...