While Turtle Rock is the namesake of the entire Central Vedauwoo Massif, it is actually one of several formations that make up Central Vedauwoo. It’s located in the northeast quadrant and has the appearance of a large dome not unlike that of a giant turtle shell. it is bordered on the west by Glen Dome and on the southeast by Friction Tower. It is easily located within the drone flight overview of central Vedauwoo seen on the Introductory page, as well as being the most dominant formation as one walks up the Box Canyon Trail towards its terminus. It is the location of a number of very unique climbs ranging from very difficult, overhanging finger jams to nailbiting thin seams to two pitches of 5.8 offwidth. One of the most difficult climbs found in Greater Vedauwoo called ‘Cross of Iron’ (5.12c r strenuous) is located here. Whatever your pleasure, just ‘go for it’. 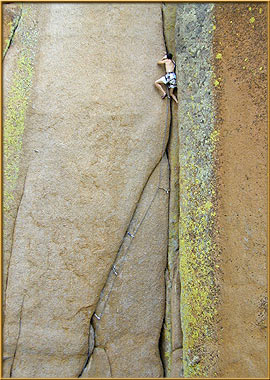 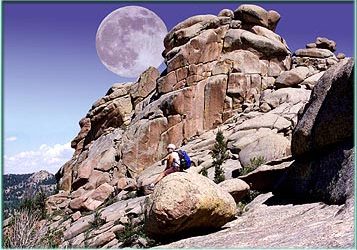 Land of the Rising Moon

LAND OF THE RISING MOON How do I get here?? See another MAP. The Land of the Rising Moon is a rather elusive place. It's not so easy to find, just head towards Glen Dome, and BEFORE you get there, veer up and right. Keep going until you reach... 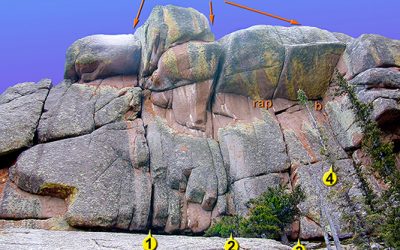 HEARTBREAK HOTEL ”Since my baby left me, I’ve found a place to dwell…” 1.) Atherolichenous Plaque (*11a start, then 9+) Begin in a challenging offwidth slot (crux) that used to be overgrown with lichen using a #4 Bro or # 2 Dude. Then move...

THE HYPERTENSION CIRQUE Beautiful little Hypertension Cirque is found on the NE top of Turtle Rock. Only two routes exist here at present, and one is the highly sought after area’s namesake climb “Hypertension”, a severely overhanging, very...