Saba is one of several islands making up the island ‘country’ of the Netherlands Antilles. It is roughly 20 miles south of St. Maarten, which is about 175 miles east of Puerto Rico. It is a unique 5 square mile island of volcanic origin and therefore rises abruptly out of the Caribbean Sea on all sides. Originally explored by island hopping Amerindians as early as 3,000 years ago, Saba was first settled by European seafarers in the early 1600’s. The Dutch officially claimed the island in 1816. We had heard that while Saba has almost no beaches, it also has no crime, no traffic, no huge luxury hotels, no population pressure and no cruise ships disgorging frantic tourists. Instead it does have superb diving, lush tropical scenery, 1400 friendly people with a casual attitude, tropical birds in abundance, plenty of trails to be hiked and lots of potentially steep, climbable rock! So after spending some time getting tuned back into Caribbean climbing on Cayman Brac, Jeb Steward and Iwent to Saba in search of more ‘Caribbean Treasure’ – it was December, ’03. 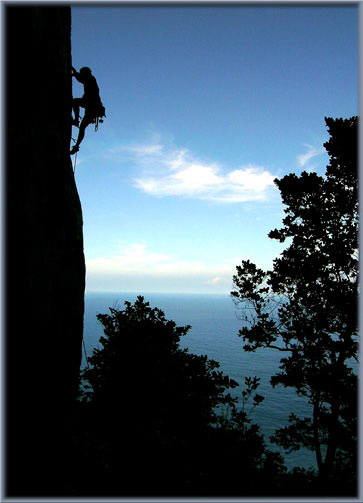 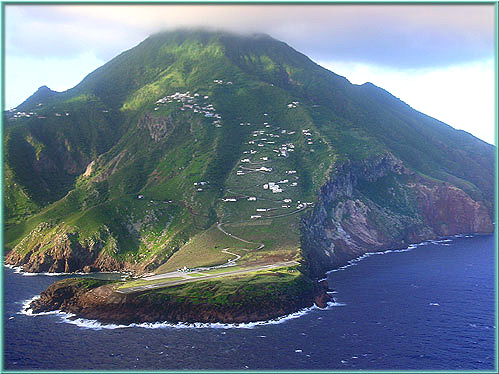 The flattest part of the island, as we discovered when we flew in, is a tongue of lava flow upon which the diminutive airport is situated. The runway is a scant 400 meters long and drops off to the sea on both ends. The Sea Otter ( the only plane that can safely take off and land in such short distances) came in rather high, flared out and settled quickly onto the runway like a predatory buzzard diving in for the kill.
Any altitude we lost on our approach to the island was quickly gained back by driving up 20 switchbacks from the airport through the little village of Hell’s Gate (you can actually see this on the above photo), where quaint little houses were improbably perched on niches cut into the steep mountainside. Windwardside, where we stayed, is situated further along in a saddle between two mountains. There is a suggestion of precious flat land found here, although it is apparent that the size of the town is strictly limited by the steepness of the terrain that surrounds it. Only a very short walk in any direction leads to near vertical dropoffs and gulleys, places even the enterprising Dutch could not populate. “The Bottom”, the ‘seat’ of the government, is found by going back down another sinuous little road from here. 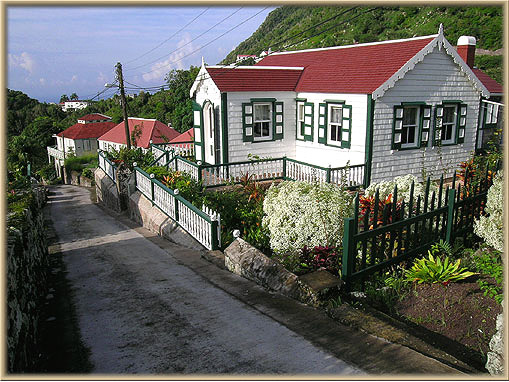 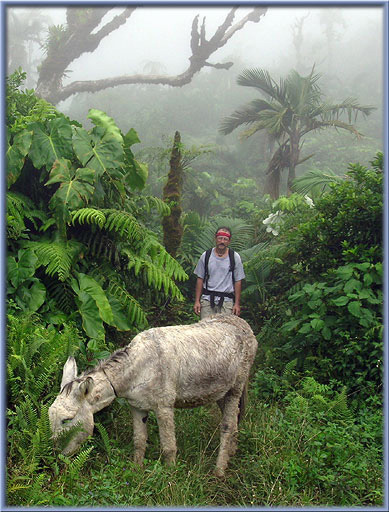 The high point of the island is Mount Scenery, nearly 3,000 feet above sea level, where one finds aperpetual cloud forest. We saw the cloud from St. Marten before we got to Saba, it was there while we were there …. and it was there when we left. We’re climbers, right? We had to see it. We plodded upwards thru dripping jungle terrain, pushing aside leaves as big as bedspreads and crazy jungle cacophony was our constant companion. Once immersed in the cloud, it became otherworldly, an eerie place, moist and silent with the exception of the wind whispering thru ghostly Mahogany trees. Near the top while stumbling around in dense mist, we came upon a free ranging white mule whose job seemed to be keeping the quickly growing grass from overgrowing the trail. An occasional window opened in the cloud, allowing ephemeral views of surrounding islands like Eustacia, St. Kitts, Nevis and Monserrat in the far distance.

Leda Brewer, a divemaster and climber working for the SeaSaba Dive Center, had done some preliminary scouting for routes in her spare time. We joined forces and began identifying more areas of climbing interest and also having a go at some virgin lines. The shot at left is Jeb moving up a super hand crack. Several rock features around the island were found to be well-consolidated, although it also became apparent that some rare species of tropical birds were attracted to the same vertical playground. For example, Saba is the last foothold for the rare Whitetail Tropicbird, which nests in abundance along many of its cliffs and is protected by national mandate, precluding intrusion by ‘outsiders’ such as us. 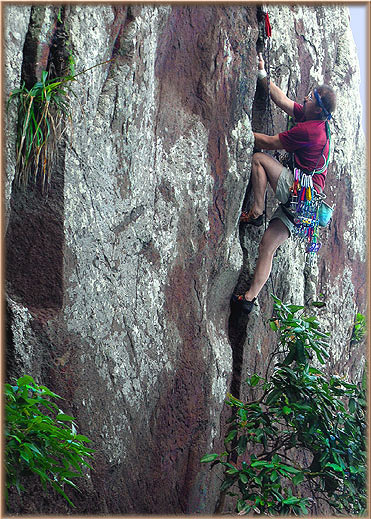 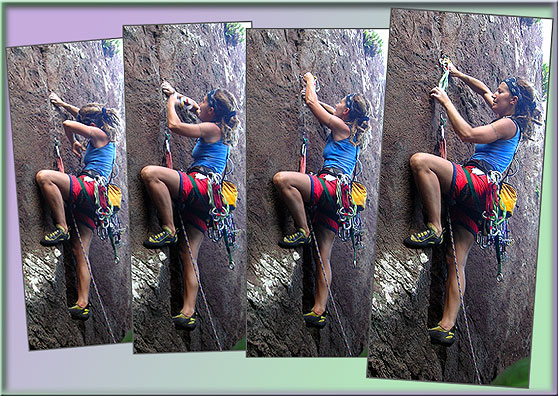 Leda plugging in gear on a first ascent……

With each passing day, we began hearing more scraps of folklore about the existence of a cave up on a mountainside that was seemingly bottomless. Amongst other rather bizarre details, chickens had apparently been dropped down into it to find out how deep it actually went. Then we heard the chickens were found floating out in the sea along the shoreline several days later, indicating that there may be continuity from the known entrance at about 1500′ to sea level. It was too much for Jeb (an accomplished caver) to pass up, so we went to find the ‘Cave of the Chickens’. Sure enough, it was there. We roped up and dropped down into the inky blackness, however we didn’t have enough rope to “get to the bottom of the story”. We will be back to solve this one for good. 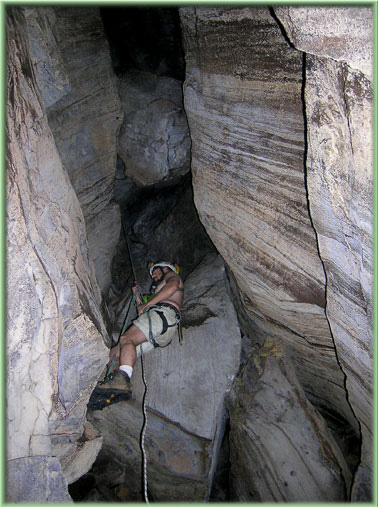 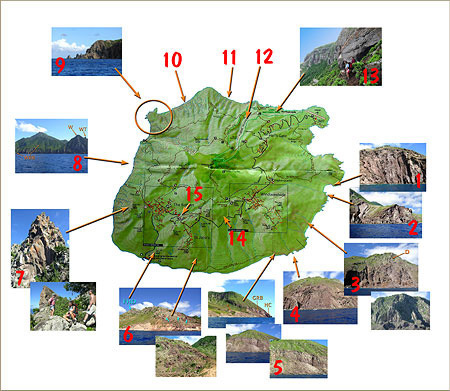 Our few days on SABA were far too short. It’s a place of lush tropical forest, tidepools, exotic birds, historic ruins, exciting diving, diverse and friendly people, fine restaurants – a rich natural and remote wonderland in miniature. Climbing potential is definitely there. Yet it also was clear that resources are limited and must be shared appropriately. Foresight and sensitivity must come into play before exploiting certain areas for one activity over others. In that regard, our proposal for the development of climbing is now being considered by authorities on the island. Part of the proposal is seen at left. There are no less than 14 areas of high interest that can be developed into EXCITING, CHALLENGING climbing locations on the island. One example shown at right (top) is known by locals as the ‘Hole in the Corner’, a dive destination. This 200 foot high seacliff is mostly well-consolidated rock with climbing surfaces ranging from dihedrals and cracks to sporty, near vertical faces and overhangs. A second area is known as the ‘Whale’s Tail’, a terrific location for several pure traditional routes as shown in the last shot (right bottom). We are currently awaiting the outcome which, if favorable, will turn Saba into a potentially very exotic climbing destination. 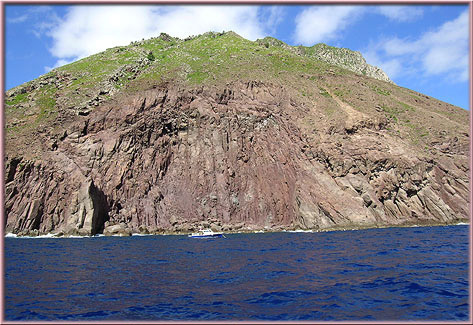 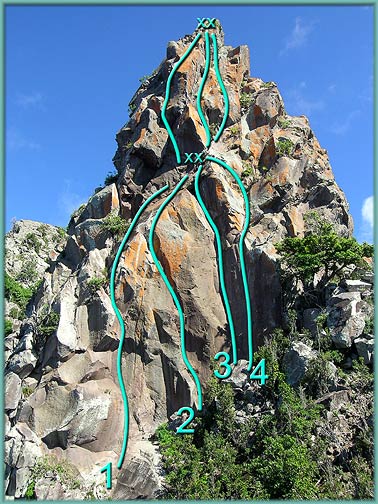