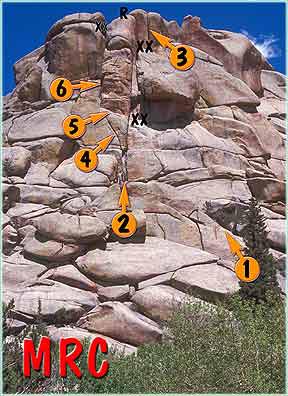 Amongst more than 1,000 challenging and sometimes bloodthirsty crack and sport climbs found in Greater Vedauwoo, some real classic lines are found on Old Easy, the most popular of which may be ‘MRC’.

‘MRC’, the “Mountaineer’s Rock Climb”,  is on the west face of Old Easy. When viewed from the west, from the Lower Parking Lot (Box Canyon Lot) or from near Fall Wall, you’ll see several striking lines that overlap and intersect on the “MRC Complex”. Don’t worry, take a look at the topo below and your confusion should be solved – to an extent at least. Several of the older ‘variants’ have been left off for now and only the most commonly climbed lines are included.

*also see Golden Grief!
Here are the most commonly climbed lines at MRC. There are other
variants that will be described in detail later. 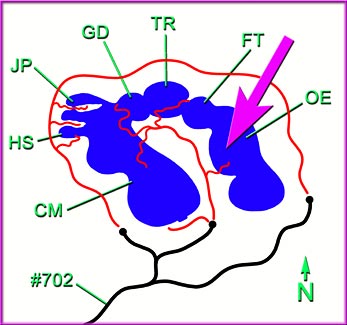 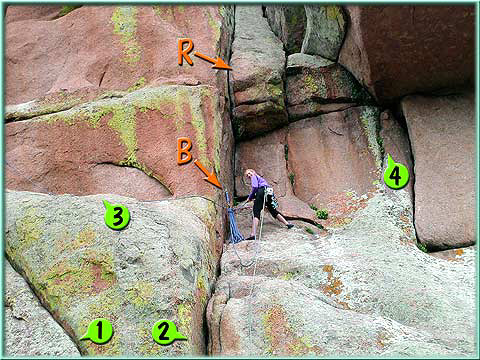 1.) Arretez Maintenant (aka OLD EASY ARETE) 9+ A fun, bolted arete, considered a possible first pitch (or not) to MRC. Steep in places and some popcorn granite, but worth the effort.

2.) MRC Direct 9+ The straight up, 2 pitch line of MRC, Vedauwoo crack climbing at its finest. Bolted intermediate belay. See Photo 1, #1, indicating the termination of the first pitch at the belay (B), the roof (R in top photo, also see Photo 2) of the second pitch and the continuing crack line above. Belay on gear at top of second pitch. Classic. The second photo is Matt Schoeck making a very critical clip at the roof.

PHOTO 1, base image, by Stacy Bender.

3.) Straight Edge 9+ (OW) A possible finish to MRC (or not). Vertical and pumpy. Take a couple extra 3.5 cams and belay from the top on gear. A big controversy on the grade. 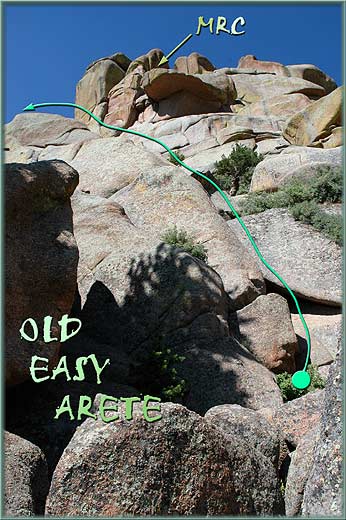 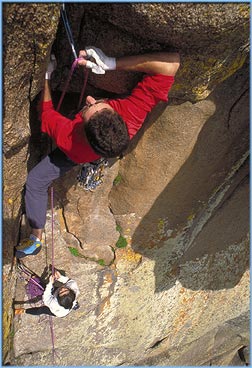 6.) MRC Left 7+ The superb left variant, great climb at its grade. Begins with a 35′ traverse left from the belay (see #3 in Photo 1 under MRC Direct above) into the crack. It’s mostly hands leading to off width at the top. One pitch. Photo 1 is the start of the vertical leg, slightly overhanging. Photo 2 is a shot of what many consider to be the crux bulge, an overhanging transition from cracks into the upper off width section. The belay is on gear about 30′ above the climber (in shot 2).

PHOTO 2 by Stacy Bender. Photo 3 is Vince Ruland at the crux bulge heard yelling something to the effect of “5.7 my a–“, a sentiment that has echoed across the Box Canyon many times in the past!

DESCENTS: 1.) The usual descent is via a 2 rope rap from bolted anchors on a rounded top marked by the XX’s on the topo. There is a short pitch of 5.4 to get up to these anchors from the top of MRC Direct, and there’s an easy boulder problem to get up from the top of MRC Left. One can get to the intermediate belay on MRC Direct from the top belay with one rope, but it’s not recommended. 2.) You can use the Golden Grief Raps. 3.) Also, there’s the optional a walk off / downclimb south of the gulley (Colostemmy) to the right past BUTTOX and FINGER FANTASY (seen on the next page). 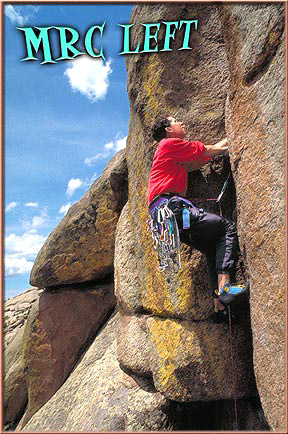 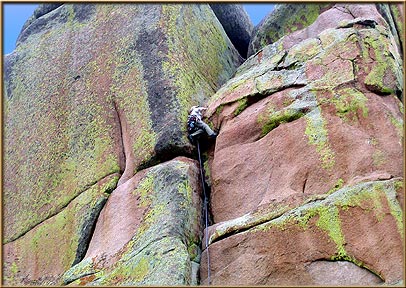 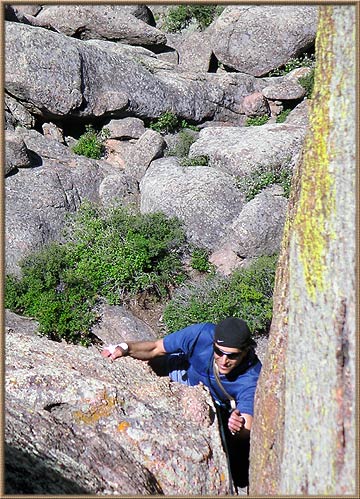 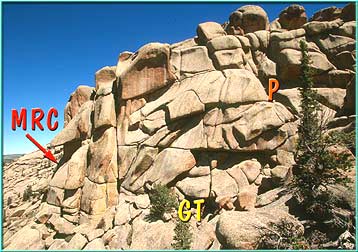 A collection of fine quality climbs exists on the south face of Old Easy, but are seldom climbed. They are located in the GOLDEN TRIANGLE (GT aka Golden Grief) and the PELVIC AREA (P, see below).

1.) Dire Pitch 8 Seen in photo number 1, this is one of two long chimneys on the west side of the area. Check out the other shot, PHOTO NUMBER 2, for close-up details of these two body graters.

2.) Golden Grief 8 A mixed climb with 2 bolts near the start and trad from then on. It’s a long, wandering and varied line. Two pitches.

5.) Buttox 10b An overhung hand jammer

6.) Finger Fantasy 12a A finger ripper similar to a genre of short lines found here…. like Jimi Handtrix and Mick Jagged over on Hassler’s Hatbox…. Sort of obscure, but real testpieces of digital strength.

This is a close-up of the two infamous chimney routes in the Golden Grief Area…. Please note the numbering on it is different than in other shots of the area.

4.) Ralph Called 10a Described elsewhere but seen well from this perspective.

B = Suggested belays
DESCENTS: There is a set of rap stations atop the Golden Grief Area … not mentioned in any guidebook. Just check out the topo (photo #1) above for their location. A 50 will get you from the top to the intermediate station. Two 60’s will get you to the bottom. You can use the MRC rap station from the top belay of NO NAME Chimney. Of course, you can always walk down / downclimb if you are so inclined. 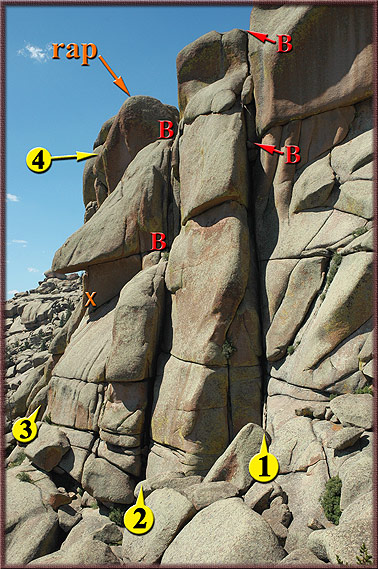 East of and above the Golden Triangle, and directly below the well-known diminutive route called BUTTOX , lies a small, seldom climbed area with 2 notable 5.7 hand cracks, a challenging 5.10 and a really killer 5.11 roof !!

Not covered in Orenczak, ’11. Unfortunate. A great spread of 4 climbs are found here.

IMAGE NO. 1 is a scan of one of the original photographs (with notations) we took when first working the area in ’93. “BUTTOCKS (10b)” is seen at the top as a large, rounded boulder sitting atop the formation (Old Easy). “FINGER FANTASY (12a)” is a difficult boulder problem directly right (east). There are 4 lines converging downwards from Buttox. These are relatively short, but each is distinctive at the grade.

IMAGE NO. 2 is a photo-topo of this cool little area showing the same routes.

2.) Descending Colon 7 While perhaps not quite as aesthetic and a little wider, the line is just as challenging at the grade. Despite what it says, go up not down…. (Kelman and Harper, ’93)

3.) Spastic Colitis 10a Its a route for contortionists, at least at the crux. Still, one worthy of climbing if you’re not too spastic. (Kelman and Harper, ’93)

4.) Colonic Detonation 11a Named for what happened when the first ascensionist peeled off, spring loaded, right above the roof. This is one strenuous roof, requiring placing good pro (at least 2 medium cams) while hanging free on hand jams followed by a high heel hook and pull to upper jams. Big time pucker factor !!. *Have an alert belayer or loose it !! (Harper + Kelman, ’93)

DESCENTS: The easiest descent is to place a gear rap after ascending one route if you are doing the others. Then clear it when finished. You can use the Golden Grief Raps. 2 60’s will get you to a nice flat area from which there is an easy walk down. There are also an intermediate anchors half way down the face in case you only have one rope. You can also downclimb the primary gully to the right called “Colostemmy” – hardly a ‘climb’, more like a grovel. 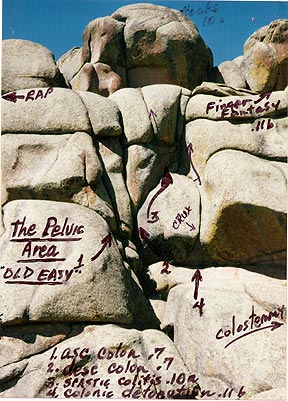 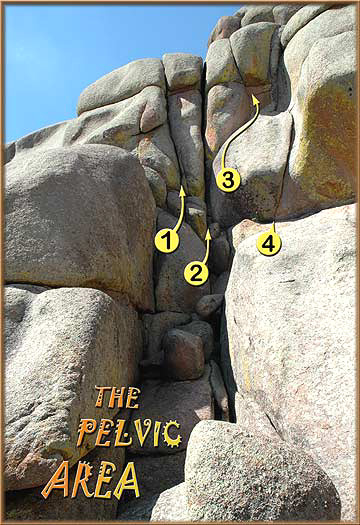