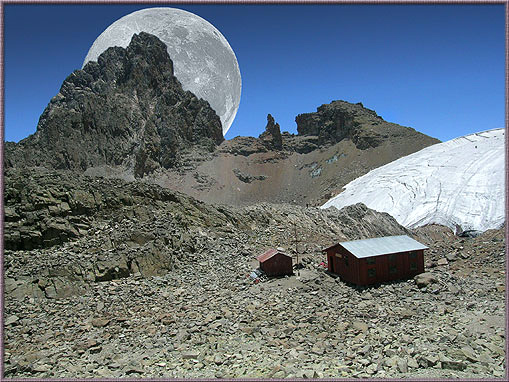 The ancient Greeks wrote of the existence of peaks on the Equator capped with snow, although it was still an open question. Ptolemy stated that the Nile had its source in two great lakes supplied with water from the ‘Mountains of the Moon’. Aristotle called them the ‘Silver Mountains’ and said the Nile was nourished by eternal snow. While the mystery continued for centuries thereafter, the riddle of the source of the Nile was always connected with the rumor of snowclad peaks at the equator, yet how was this possible? Equatorial Africa brings to mind hot, steamy jungles running rampant with wild creatures. (The photo is of moonrise at high camp, Mt. Kenya, with the Lewis Glacier glowing on the right.) It was not until 1848 when a German Missionary plodded and hacked his way far inland from Mombassa with several native porters when he actually saw a huge mountain on the horizon ‘appearing lie a white cloud’. After reaching the foot of it and observing it by day and moonlight, he was convinced it’s top was covered with snow. The natives told him when the ‘silver stuff’ was brought down in a bottle, it was reduced to nothing but water. Dr. Rebmann had found Kilimanjaro.

When he took the story back home, he was ridiculed and run out of the ministry. The following year, another missionary was looking for ‘surviving Christian remnants’ at the Equator when he saw a white topped mountain some 75 miles NE of Nairobi. Dr. Krapf described it as ‘a gigantic wall over which arise two great towers’. The natives would never go up the slopes of the mountain on account of the great cold produced by a mysterious white matter, which they called ‘kiria’. This was Mt. Kenya. From a climbing standpoint, Mt. Kenya is different than KiIimanjaro. It lies astride the Equator while ‘Kili’ lies some 300 kilometers to its south. Its lower slopes teem with wildlife of all sorts, including Cape Buffalo, hyenas, elephants, bushbucks, baboons and an occasional lion (comparatively less animals are found on ‘Kili’). This is no small consideration, just ask Bongo Woodley, Warden of Mt. Kenya National Park, who has seen more than his share of violent animal attacks. Also, while somewhat less high than ‘Kili’ at 17,400 feet, the top 2 -3000 feet of the mountain requires technical climbing – it is NOT a walk up. Moreover, no guides are required, so you are on your own. This is true adventure climbing at its best. “… I’ve been fortunate to have traveled to many of the world’s most secluded and exotic mountain ranges. When I’m asked what my favorite climb is, I don’t hesitate to answer ‘Mt. Kenya’.” (Rick Ridgeway, Introduction, ‘No Picnic on Mt. Kenya’, Felice Benuzzi, The Lyons Press, orig. 1953) I could not pass this one up….. 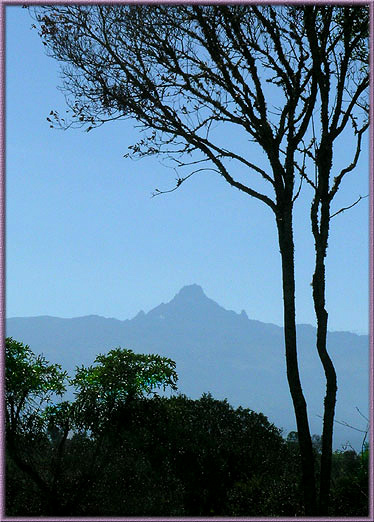 The mountain does not look particularly intimidating from a distance, does it? 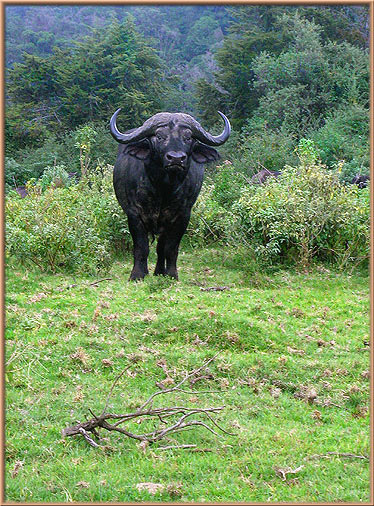 Stories about wild animals proved true as this beast and his buddies were waiting for us outside the gates to Mt. Kenya National Park…. 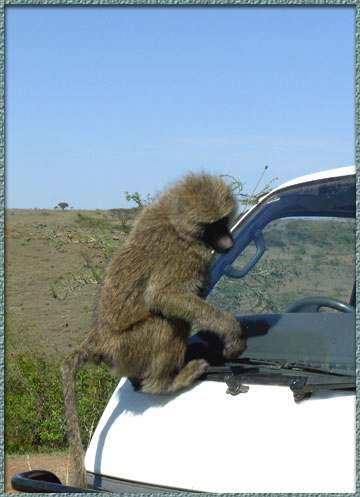 Baboons were curious and this guy wanted right in to the van. I suspect he probably could have driven the thing as well…. 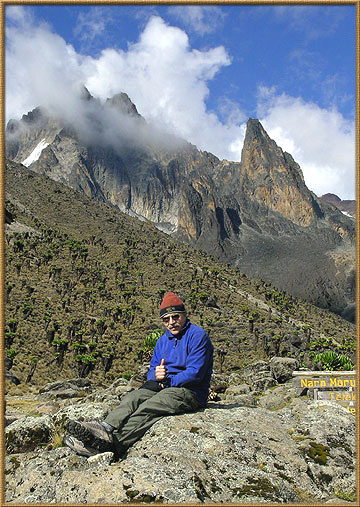 At about 14,000 feet up the mountain, the ‘easy’ approach via the Noro Moru Trail is over and the real fun begins. The shot to the left  shows Point John as the pointed tower on the right with the ‘Midgits’ lower and center. Both summits of Nelion and Batian are lost in the clouds. Click on the image immediately below indicating the rather strange, other-worldly atmosphere one finds up here (taken at dusk, end of first day). 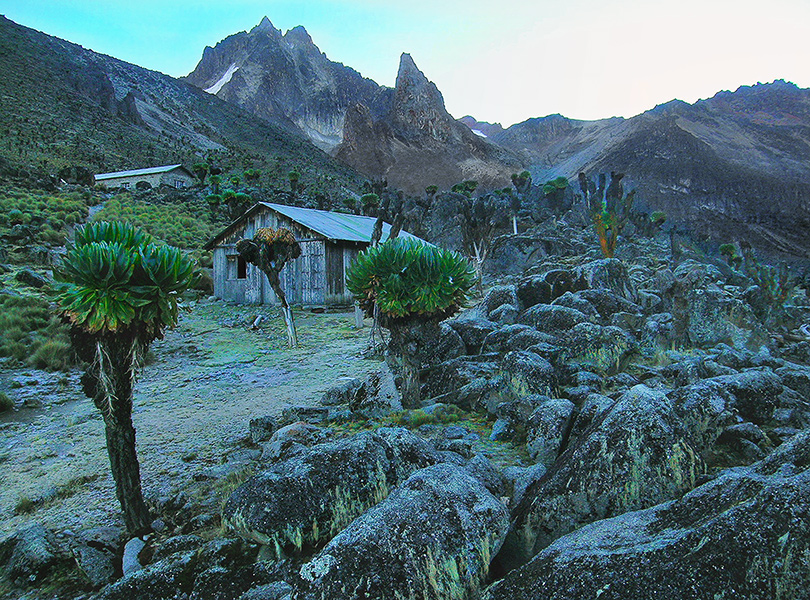 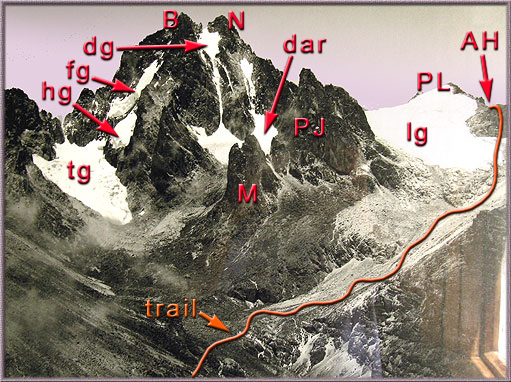 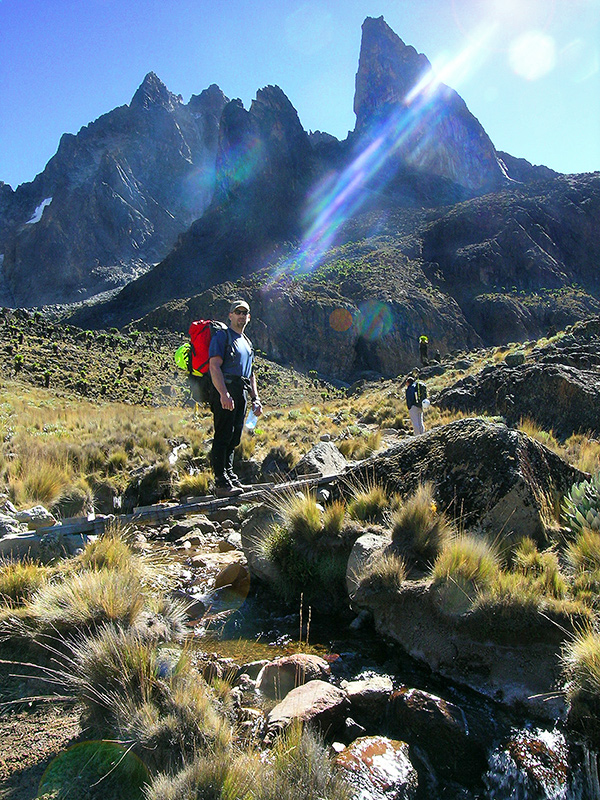 Beginning of the second day just before the trail gets considerably more steep …… again! One surely traverses through some lunar terrain. 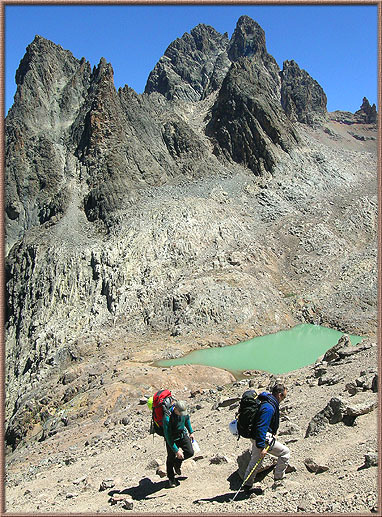 About half way to the Austrian Hut and high camp, one begins to appreciate the scale of this place. That’s about 3000 vertical feet of rock ‘over there’. Perspective really changes things, but the peak on the left is Point John and Nelion is the pointed tower on the right. Batian is in the middle background.

The Lewis Glacier had to be negotiated to get to the base of the climb. It was clearly evident from seeing large volumes of water streaming off the glacier, both day and night, that the icepack is melting away at an extremely rapid rate. Stories abound in villages below of severe water shortages and drought conditions not present just 10 years ago. 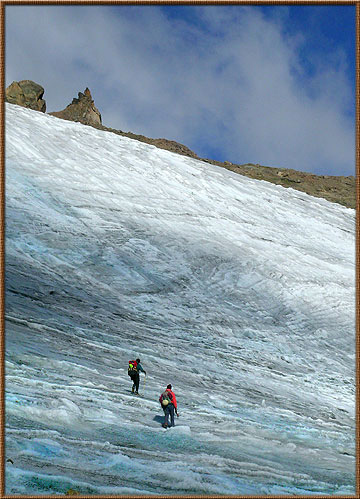 Here’s Jamie on lead, about the 5th pitch on the so-called ‘normal route’, although we deviated from this line in several places. All in all it was about 18 pitches of moderate climbing, 5.5 to 5.9, however at 16 – 17,000 feet in boots carrying a medium pack, it can tend to push you a bit.

Ernie Johnson and yours truly on the summit of Nelion. Mt. Kenya is the second highest point on the African Continent at approx. 17,400 feet in elevation at the summit. There are really two summits connected by a rocky ridgeline, Nelion and Batian, the latter being slightly higher. 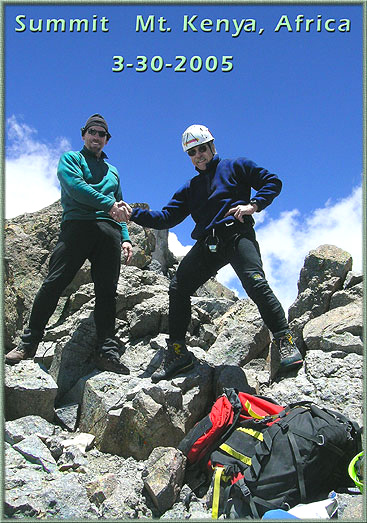 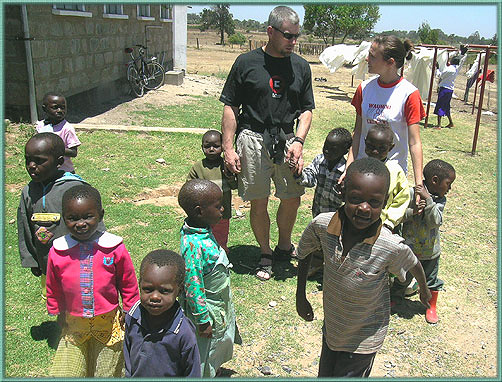 We stopped at an AIDS Orphanage in Nanyuki to get a better understanding of the devastation the disease is wreaking on the population. This is a real tear-jerker of a situation… and definitely forces one to reflect on how optimal conditions are where we live in the USA or elsewhere. * MORE LATER! 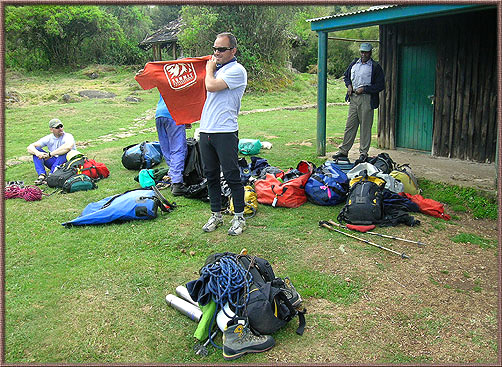 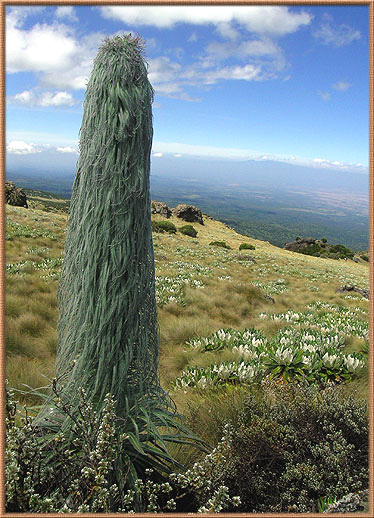 Huge Lobelia populate a specific ‘zone’ up the flanks of the mountain… interesting species.. 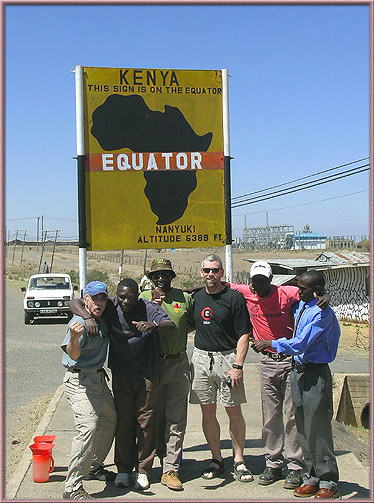 Have you ever stood astride the Equator? Well, nothing really special happened, but it was a great experience.