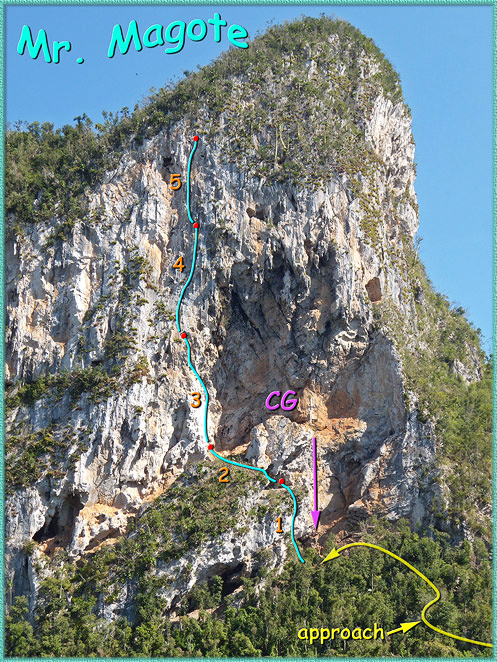 As sometimes happens, I began to get ‘the itch’ to find new territory one day and ventured up a hillside of broken pastureland and jungle-like terrain located several hundred yards above (towards Vinales ) El Palanque Wall. As I skirted some nasty looking cattle, I began scrutinizing the steep, imposing wall of multicolored limestone above me. From previous experience in the Cayman Islands and Puerto Rico, knowing that certain colors of rock meant varying degrees of sharpness, it appeared that there was a potential line clear to the top of this wall – it was by far the longest line we had contemplated to date – but how to get there? Using a machete borrowed from a local, I began hacking away vines, roots, stinging nettles and leaves so big you could use them for a blanket. About two hours later, less at least two liters of sweat, a few CC’s of blood and the normal amount of skin left on sharp limestone, I was at the base of the wall – and it WAS BIG. As I soloed up in several places, I became more convinced that the line would go. Sure enough, it was climbable rock as far up as I could go without being roped up. Who knew from there, but that’s the promise of high adventure, isn’t it? As it was near dark, I slithered and stumbled back down thru my botanical tunnel. Later, I told Luebben of the find and we set off the next morning ready to bolt. After 3 long day’s work, Luebben and I completed the first four pitches (**The new Guidebook should’ve given credit where credit was due!!). We also started staying in a cave accessible from the second pitch we called ‘Casa Gringo’ (CG in above topo), a place to take refuge, store water and supplies. I put in a ‘quick rap’ station (approx. 130′ to the ground, shown by the ‘down arrow’ above) near the cave for quicker, easier exits – we could also ‘jug up’ with supplies. We contemplated work on a fifth pitch, but time drew short and it was put in on a subsequent trip by Luebben and Cross.

This is a ‘big’ route consisting of 5 pitches found about 500 yards uphill to the south (towards town) from the El Palanque Wall on the same Mogote (Sierra de Guasasa). The trail leading to it begins roughly 100 yards (north, towards El Palanque) from where the road from Vinales crests the hill. Scramble up a dirt embankment near an old telephone pole and begin winding your way up thru grassy terraces and grazing cattle. Continue upwards and you will find the trail winding up through the jungle and over sharp limestone as there is no other way to go. When you reach the top of the trail (now only about 10 minutes of puffing and sweating)in small cull de sac of orange and black rock, look slightly downhill to your left and you will see the first pitch of the climb. *Use double ropes! 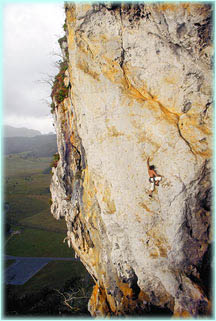 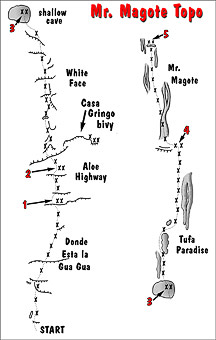 The first pitch (approx. 75′, 8 bolts, 5.11b) ascends an overhanging face littered with pinches and dicey underclings followed by about 3 powerful throws. I was so tired at the end of the first day working on this climb in the tropical heat, I screamed “where’s the bus” in desperation (in the hopes someone would take pity on us and give us a ride back into town). It echoed back and forth across the canyon and the Cubans picked up on it. They started yelling “donde esta la gua gua” (that’s “where’s the bus” in Spanish) and we all laughed until we collapsed – the first pitch had its name. In the meantime, Luebben was hacking his way with a machete through giant Aloe plants above and flinging sharp missiles down on us. 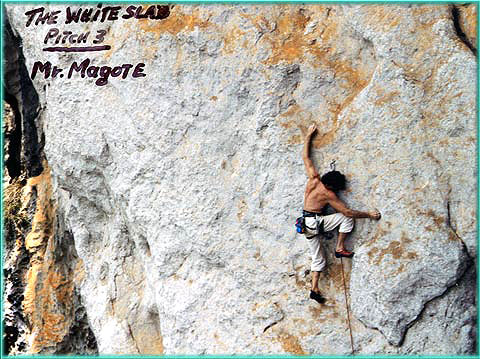 We completed the “Aloe Highway” (2nd pitch, approx 60′, 3 bolts, 5.8) before dark. We also found a big ledge and cave at this point, soon to be known as “Casa Gringo”, which served as a makeshift climber’s cliff dwelling for many days and nights to come (there’s a convenient rap station here for quicker access to and from Casa Gringo). The next morning we started up the steep, nearly featureless white face which required continuous balancy, almost balletic moves. “Terra Blanca”, as it came to be known, (3rd pitch, approx. 90′, 10 bolts, 5.11b – *Seen in shot to the left and in photo 1 below) ended in a convenient shallow cave (*See photo 2 below), perfect as a base of operation for an all out assault on the next long section of vertical to over-vertical exposed face, riddled with small features and long, ‘frozen’ lines of flowstone. We worked the 4th pitch (approx. 90′, 12 bolts, 5.11c) into a fantastic line of sustained climbing we called “Tufa Paradise”. The 5th pitch (approx. 90′, 8 bolts, 5.11a) was added on a subsequent trip by Luebben and Cross and dubbed ‘Mr. Magoo meets Mr. Magote’ .

Now one can descend from the top of P5 to the shallow cave – top of P3. Then down to the top anchors of P2, scramble up to Casa Gringo and use the exit bolts found there for a final rap to the ground. “Mr. Magote” will surely challenge the best of sport climbers that choose to come here. The day after finishing the climb through the FOURTH PITCH, we brought the Cubans up to belay so we could photograph some of the action. At the end of the day, we undertook our traditional “Burning of the horrid, stinking sox” ceremony in Casa Gringo (we took to wearing sox as a protective measure because of the intense wear and tear on our feet over days of time in the tropical heat). Those sox were just too bad to even think about, we had to do away with them. Seen in photo 3 below (*NOTE: these three shots are scans of original unretouched snapshots I took while “on the job”) is an exhausted Craig Luebben, now known as Mr. Magote, and “Viti” being gassed by burning sox …… How can they be smiling? 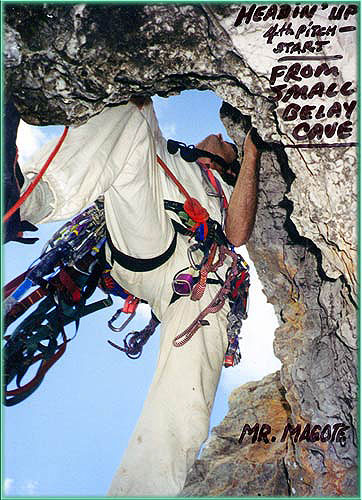 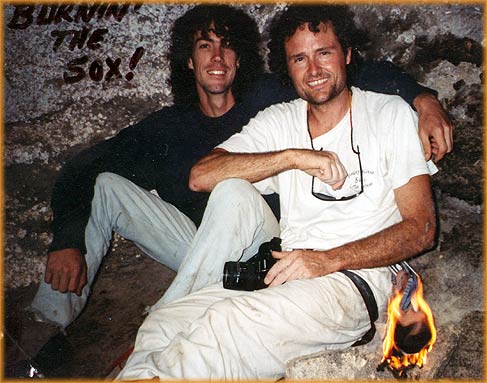