(as viewed from the top of Glen Dome) 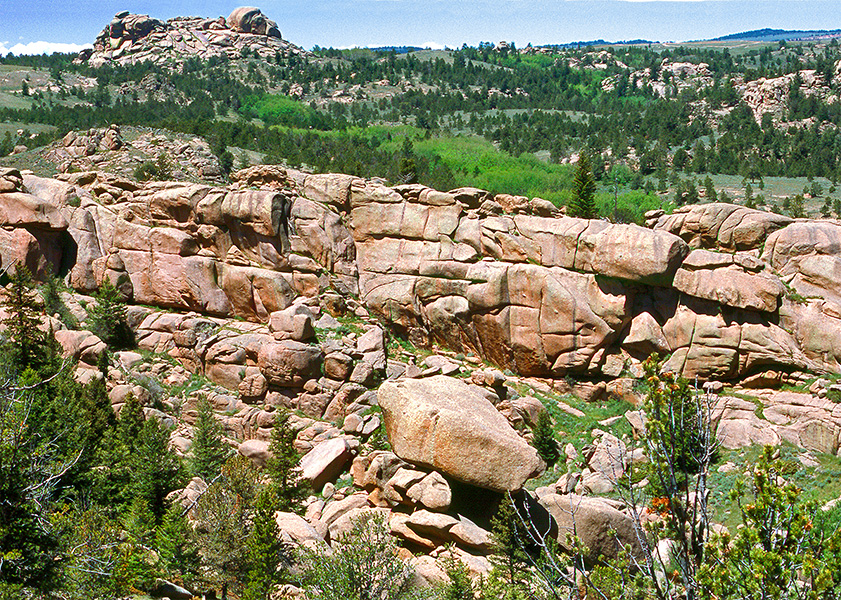 About 200 yards beyond Holy Saturday along the Turtle Rock Trail, on past the trail to Foreign Territory, you will find a three-layered boulder stacked about 15′ high on the right (E). The trail up to Jurassic Pass and down into Jurassic Park is just past this point on your right. Here you’ll find a notable collection of 20 routes, mostly short (50 – 80′) but usually adventurous and even testy at the respective grade. ‘JP’ is seemingly remote, and it was until climbers began to discover its varied climbing as well as the pristine surroundings. Certainly two routes (Mud in Your Eye and Lichen Lung) were put in before 1992. These were pointed out to me as I roamed the area with crackmaster Bob Scarpelli. Possibly 2 more lines were climbed that weren’t documented except by WOM (word of mouth). There was no claim of the area being named at that time (see Timmet: sorry fella, you submitted erroneous / wrong information). Of course nowadays there are spurious claims of other earlier first ascents, but then WHY were all other lines literally and physically untouched – packed full of dirt and gravel eroded from above over geologic time, filled with roots and bushes so big no one could have gotten through? Photographs and original notes documenting this do exist. At any rate, most lines went in permanently after much work during the early nineties. It was common to see a moderately large cougar who resided here at the time. In ’92 and ’93, “Mikey” (we named him for Mike Crichton, author of the book Jurassic Park, also a personal friend of mine – sh) would come out, growl occasionally and sun himself on a flat-topped rock across the little valley, probably salivating at a likely lunch. Naively, we just continued climbing and talked ourselves into thinking MIKEY was our ‘buddy’. Mikey was seen less frequently in ’94, and was seen only occasionally after that. A cougar of similar size and color was reported to be prowling around the Beaver Pond in the Summers of ’01 and ’02, but it’s not known if it was ‘Mikey’.

As well as being a really cool place to hang out and climb, Jurassic Park is a great refuge on really windy and/or cold days. A word of warning however: If you hear deep, resonating growling or slurping sounds, it might be a good idea to vacate the area at your earliest convenience. Cougar, Velociraptor, T-Rex or just wind …. one never knows!

INCIDENTALLY, to be sure, the name ‘Jurassic Park’ was inspired in part by the book and movie of the same name, both of which were wildly popular during the nineties. In fact, to dispel any legal infringements, I (sh) sought and obtained legal rights to use the name ‘Jurassic Park’, as well as the names of principal life forms depicted in the film from Universal Pictures after first contacting Michael Crichton, who gave his consent as well (I – sh – do have documents). Additionally, some don’t know that Jurassic Dinosaurs roamed SE Wyoming and the entire area is an archeological repository of their fossilized remains. In fact, Como Bluff (about 45 miles north of Vedauwoo) has been called the “motherlode of Jurassic dinosaur deposits”, including probable Raptors. Further, the wind does not just ‘prowl’ through the forest here, at times it ‘growls’ through the diminutive valley after accelerating through the venturi of ‘Jurasssic Pass’. These things in concert, along with the presence of ‘Mikey’ made it easy to visualize this unique location as another ‘Jurassic Park’. Thusly, naming the area was not just a trendy decision, decried very publicly by certain so-called ‘local’ climbers/authors (see, for example, Fat Crack Country, Orenzac, Extreme Angles.com, Publisher, 2003 pg. 11) who apparently lack clear understanding of the facts.

***FOR MORE SHOTS OF J. PARK, check out this site which has some cool, big photos of trips to Vedauwoo, especially “the Park”. Big thanks go to Aran, Amy, Ellen, Curtis and Greg who all tested the routes found here. One correction – the photo entitled “Ellen leading CC Left” is actually the route Sore-O-Pod. The Juvenile Raptor Boulder is seen on the left, and there are bolted lines on either side of the big crack that Ellen is in. CC Left begins about 50′ to the right of this big crackline. This is not mentioned in criticism whatsoever, just clarification. Great shots. 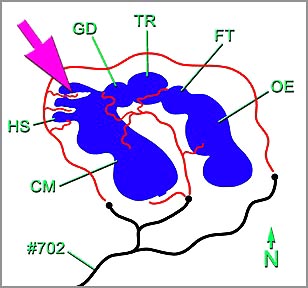 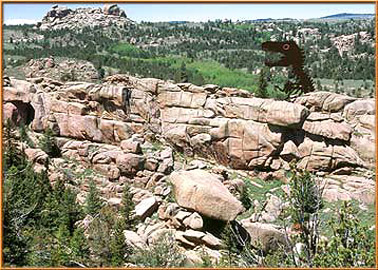 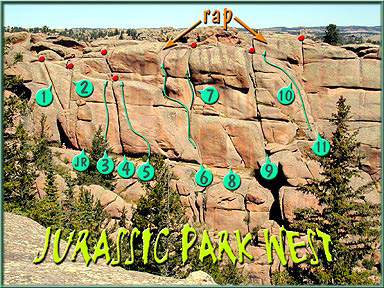 *NOTE: There are two rap stations available for descent (seen in above topo) and you can also downclimb to the right of route # 20.

1.) Prologue 5 Start up a chimney behind the Juvenile Raptor Boulder (JR) and take a handcrack that goes up and left. (Lossner and Harper, ’92)

2.) Recombination Mutation 6 Same start as #1 but continues straight up. Superb hands at the grade. (Lossner and Harper, ’92)

JR) The Juvenile Raptor Boulder. There is a sneaky start to both routes no. 1 and 2 on the front side (south side) of the JR Boulder. It goes at about 5.8. Give it a try!!

3.) First Iteration 10b (3 bolts) A sporty, slightly run out route with three bolts just right of JR. Use a small cam in the horizontal fracture if you feel more secure. (Harper and Johnson, ’92)

5.) Second Iteration 10d (7 bolts) A sporty route that opens with a dyno start, protected if necessary by a bolt, to a secure (??) edge. It diagonals left up a series of rounded edges and finishes with a difficult, thin move at the last bolt. The crux for short people might be the dyno start! Belay with gear on the shelf above the last bolt or continue to the top on # 4. (Harper and Thomas, ’95)

6.) CC Left 9 Follows # 7 but jogs left after about 40 feet ascending large flakes and a super roof to belay/rap anchors. Top of the route is seen in Figure b above. (Diamond and Harper, ’92)

7.) Crichton’s Crack 11a You’ll use lots of technique on this climb starting in a left facing groove that’s bottomed out in places. Continue up into a pod and a short, vertical crack. Next you’re confronted with a 15 foot bottomed out crack leading to a crack that goes from hands to fists to an offwidth finish. Good luck. (Harper and Thomas, ’93)

8.) Flake-O-Saurus 10c Tough jamming up an overhanging, right facing crack that comes to an end about 30 feet off the deck. Cruxy moves across unprotected face get you to the shelf above. Scramble off to the right or continue on either 6 or 7. (Harper and Johnson, ’92)

9.) Get Up That Tree 8 Inventive route that goes mostly 6 except for the ominous, large chockstone low on the route. Is that old tree there for a reason?

11.) Lawyer On The Toilet 8 A challenging start at the grade leading to a wide crack just right of # 9 leads to a thinner crack above a large corbel. Some slightly sketchy popcorn granite, but well worth the price of admission. (Harper and Johnson, ’92) 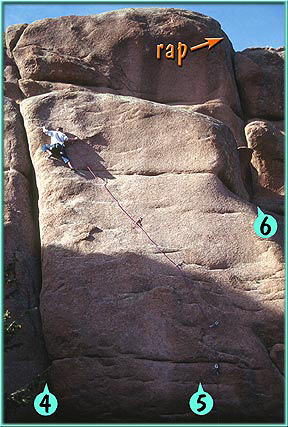 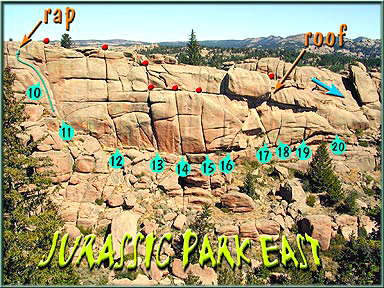 * Note: Two rap stations are available for descent from all routes, and you can also downclimb to the right of route # 20 (blue arrow).

11.) Lawyer On The Toilet 8 description in J. Park West, also seen in above topo…

12.) Slot-A-Saurus (aka Anatomy Lesson?) 9+ Probably the most popular climb in JP, surely the longest. Start in or out of the slot, turn the corner and find a crack. There are two shelves, the second more tricky than the first to surmount. Watch the bottomed out crack leading to the bouldery finish – you might want to sneak in a #1 Lowe ball here. FFA reported after the fact by Waterman et al., ’85? Climbed and documented (Harper and Diamond,’ 92)

13.) Lichen Lung 10c A sustained, testy left-leaning thin hands crack that widens gradually at the top. Belay on the big ledge, its (mostly) over by then anyway. (Cairnes, ’77?)

14.) Mud In Your Eye 10d Reportedly a Bob Scarpelli classic, therefore probably harder than its graded. Puzzle out the thin bouldery start and you’ll be rewarded with great finger jamming over a slightly overhanging bulge. (FFA claimed by Cairnes, ’78)

15.) Velociraptor’s Revenge 11b Use the bolt if necessary for the difficult start and go for superb finger to hand jamming above. A critical hold broke loose down low, but probably climbed, not documented prior to ’93. Stay fired up for the dicey finish. (Harper and Diamond, ’93)

18.) Tricera-tops 3 10c A right leaning hand to finger crack (10b) leads to a ledge (The ledge is called “Coprolith Ledge”, a hint for you science types.) which leads to the crux roof. (Thomas and Harper, ’93)

20.) Epilog 7 Go up a left leaning groove to a chimney. (FFA probably Mikey the cougar.)