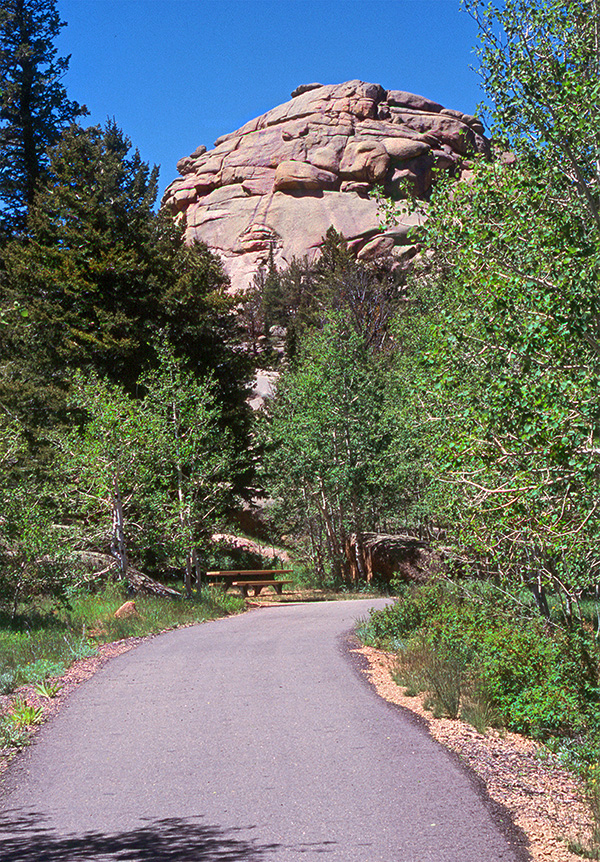 Glen Dome is a separate rounded formation that is easily seen while walking up the Box Canyon Trail as shown in the above image. While home to only two climbing routes, it is also the final destination of the old Nature Trail originally constructed by the Civilian Conservation Corps during earlier times. Unfortunately, the USFS has not maintained the Nature Trail for decades, however it is still easy to follow by simply observing remnants along the way such as the well-worn foot bed, old handrails, wooden steps and retaining walls cemented together that are crumbling. This trail offers the easiest access to the routes, as well as to a fantastic observation point overlooking a wide panorama stretching from Poland Hill on the west, across the wide valleys which trend northwards towards the top of Pole Mountain and the highest point on I-80 called ‘The Summit’. Jurassic Park is obvious just below and northwestward from here. The entire length of Brown’s Landing is seen as well as all of Blair and the Sherman Mountains to the east. This trail also offers convenient access to the Land of the Rising Moon on Turtle Rock to the immediate east of Glen Dome, as well as to the Finger Buster Boulder behind Hassler’s Hatbox. For a more detailed description of the Nature Trail go to the HIKING SECTION.

Access to Land of the Rising Moon: Several options here. Just after encountering the wooden footbridge, instead of following the Nature Trail, go northward up a bush choked gulley following it to near it’s top. The Land of the Rising Moon will come into view on your right. Head up over rather featureless slabs towards this formation. Also, my favorite is from near the base of the climbs, head directly east over rather featureless rock with large, horizontal cracks towards the formation. Then approach as in above example.

THE ROUTES: To access the routes, take the Nature Trail (see the map plus images 2 – 5 below. You will encounter remnants of the original trail along the way as described above. (A more extensive description of the trail is found in the HIKING SECTION.) As you ascend a set of wooden steps you are nearly at the base of the routes shown in the last image below.
1.)  Glen’s First Name 5.4  A straight forward handcrack is found only a few yards off the Nature Trail. If you want jamming practice at a low grade, this is your climb. If not, you really aren’t missing much. (FA: long before the claim by Murray and Kelman, ’93).
2.)  Water Streak 5.7  There are two water streaks seen from the trail about 20 feet right of Route #1. P1. Surmount an awkward bulge and climb up between these water streaks to a belay on a convenient ledge. The top half of this pitch is run out so be aware. P2. Wander up the interrupted face passing a left facing dihedral and follow it to the top. (FA: Gampher and Jaquot, ’63).

Descents: Take your pick of walking off in nearly any direction. 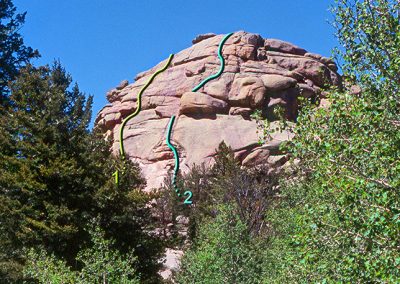