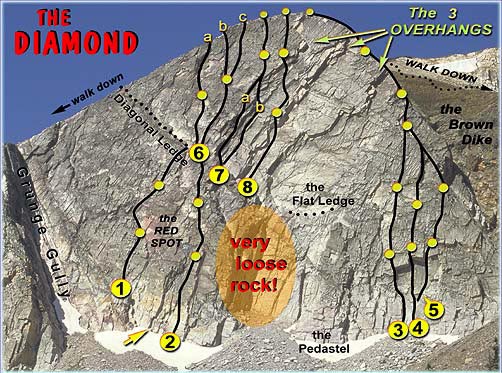 This is ALPINE CLIMBING AT A HIGHER LEVEL. The formation is about 900 feet from bottom to top and offers superb, long routes. Climbing these routes requires climbing ‘straight up’, basically ignoring multiple crack lines that diagonal up and right. There is a tendency to follow these easier lines of weakness which lowers the grade, and challenge, accordingly. It is suggested that you stay clear of the lower center of the formation (shown in orange). As seen in the photo on the right, there was a major rockfall that took out several good routes in the early spring of ’99, and considerable loose rock remains situated in precarious locations. (More will be added to route descriptions soon.) Descent is by 1.) the MBPT, 2.) the Diamond Gully after melt out or 3.) other alternatives.

1.) Red Spot Variant, 5.6. A variant of an older, popular route which intersects the left side of the red-colored rock ‘spot’ and goes to the diagonal ledge. P1: From the Red Spot Pedestal, climb an easy crack to a ledge at the bottom left of the Red Spot. P2: Skirt the left edge of the Red Spot, belay at the top of a right facing dihedral. P3: Cut right under a roof to the Diagonal Ledge.

*THE ARROW indicates the “Davis Chimney”, 5.7, an older route and an easier way to the top of the Central Pillar. WARNING! Watch out for loose rock in here, especially after meltout and first half of the climbing season!! This is nasty territory and people have been hurt here! Belay the first pitch from the left side of the bottom of the main crack under the small roof to avoid being hit by rockfall. Merges with the Diamond Central at second pitch.

2.) Diamond Central, 5.9+. A great way to access the Diagonal Ledge. P1: Begins on the lower right face of the Central Pillar and jogs left into a crack line that goes all the way to the top of the pillar (with 60 M ropes). Scanty pro here!! P2: Move up and left, aiming for a large right facing dihedral about 100 feet above. Belay to the left of a large ‘cave’. P3: Climb up to the Diagonal Ledge and set belay. Consider continuing on the Diamond Express or the Overhang Routes.

4.) Roofs Center, 10b. Three and a half pitches to the major right side arete.

5.) Roofs Right, 10a. Three and a half pitches to the major right side arete.

6.) The Diamond Express, 9+, 10a. A variety of lines depart the DIAGONAL LEDGE for the summit. Bypass the numerous lines of weakness that diagonal up and right, climbing ‘more or less’ straight up to the summit.
a. 2 pitches. (See shot below, Jeb Steward linking A to C on an incredible, windless, warm blue day!!).
b. 2 pitches.
c. 2 pitches.

8.) Here’s to the Hardmen, 10c. Three long pitches. Follow lines of weakness paralleling the SECOND major overhang, crossing above the overhang, and crossing over the FIRST overhang to the top. The photo is Rob Kepley on a particularly steep section nearing the second belay. 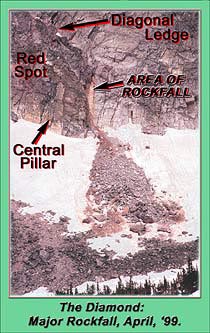 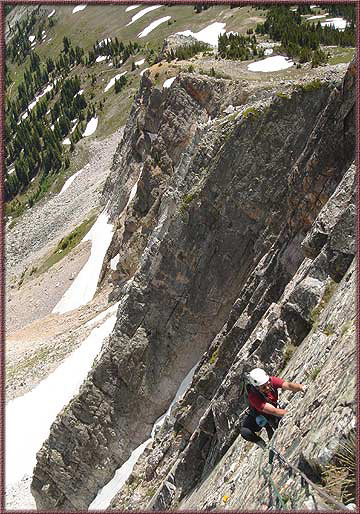 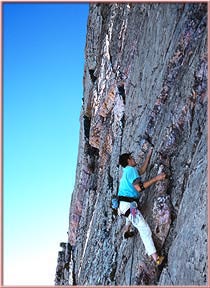