I first went to Cuba in the summer of 1997 in search of rock climbing potential. I was climbing in the Caribbean, fairly close to Cuba at the time, and out of nowhere came an ‘opportunity’ to go there. I HAD to see this place! I had heard rumors of steep climbable faces ‘here or there’ on the island and I wanted to find out if it was true. Of course the imprecise descriptions of such TREASURE came second or third hand (or more) from non-climbers but what the heck, sometimes great adventures are born from much less! So I flew through the ‘back door’ on an old outlaw DC-3 that flapped through the air like a starving vulture. There was no copilot, and you could see outside through holes left where some rivets had fallen out. When the pilot had to take a break, the single ‘attendant’ took his seat. Oh my God, what had I gotten myself into this time?? 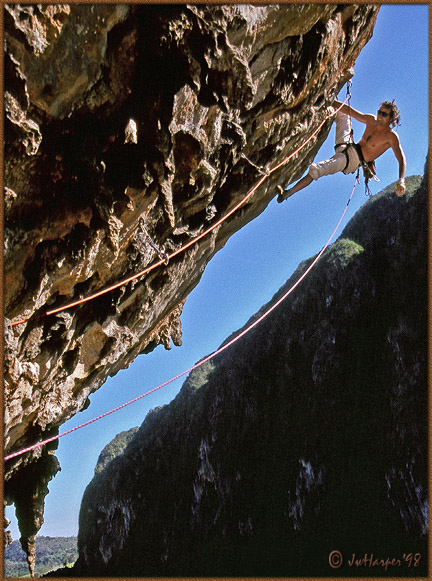 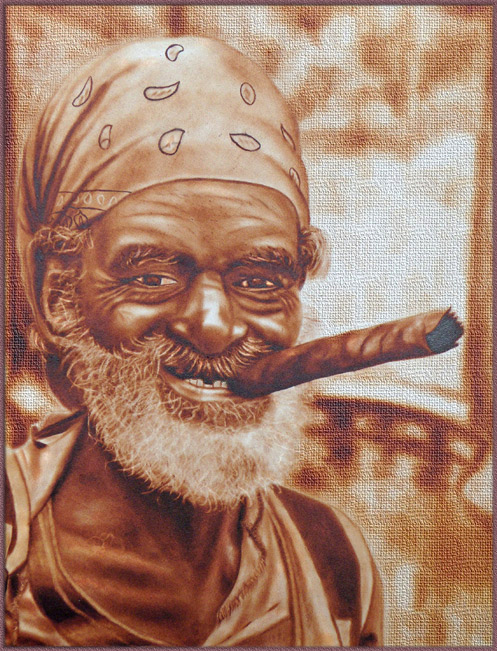 After landing, evidence of the Revolution was everywhere, as was military presence. The degree of apparent anti-American sentiment was shocking – clearly very serious business indeed! I was not sure I had done the right thing in coming here, one very white face amidst a sea of brown – and I didn’t speak Spanish (English had been banned for 40+ years). How could something like this exist less than 100 miles from US shores? How I managed to rent a car is still a mystery, and how I found my way out of Havana, its smoky atmosphere and seemingly endless barios, is a topic of another story. However once into the hinterlands, I was thoroughly stunned to find a nearly unimaginable tropical paradise. Quaint little villages as well as tobacco, sugar cane and melanga farms dotted the landscape. Also, much to my surprise, the Cuban people were warm and friendly to me, especially in the countryside. They were literally ravenous for news and information about the United States. And yes, there was climbing potential far beyond earlier descriptions, particularly around the small rural village of Vinales. I found out in years past there had been a route put up by a Columbian mountaineer, and also a pair of French women climbers had ventured about up about one pitch on a face on the north side of Sierra de Galleras, one of the principal Mogotes (little mountains) in the area. Outside of that, there seemed to be no other climbing development whatsoever. Yeessss!! 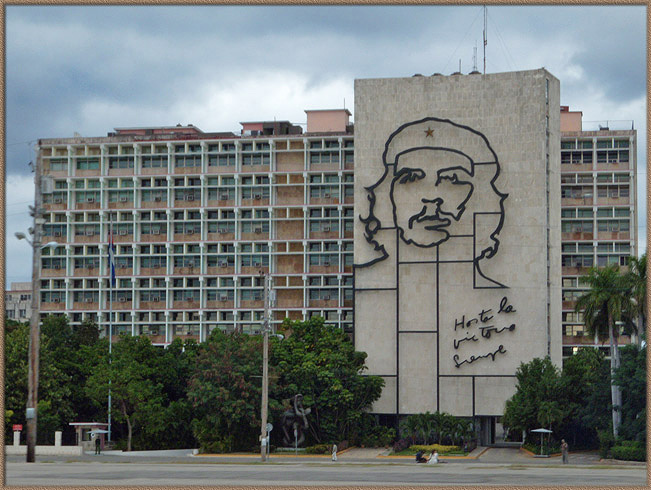 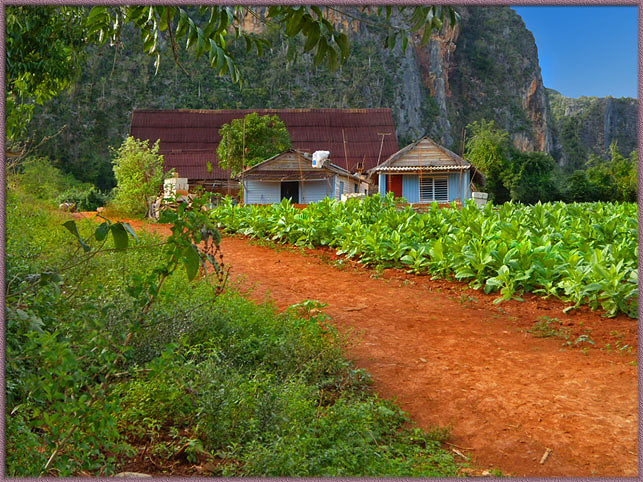 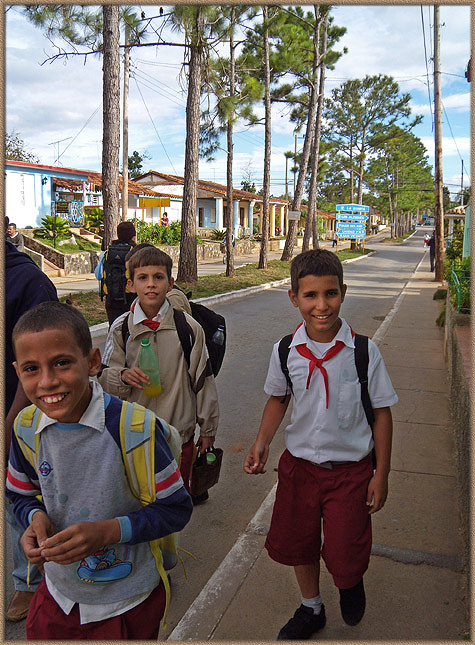 In early ’98, I returned with Craig Luebben (a long time climbing friend), George Bracksieck (then editor of Rock and Ice Magazine) and Arm 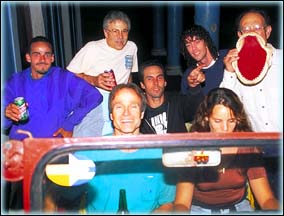 ando Menocal, a lawyer-climber and climbing advocate who had great interest in returning to Cuba to explore his Spanish roots. Much like on prior trips to Cayman Brac and Mona Island, Craig and I were raring to bolt!! After recruitingsome Cuban climbers, we explored the island from tip to tip (over 1800 miles on the road!!) reconnoitering for climbing potential (*See the Cuba map at the purple X’s for areas of great climbing potential). I got in some diving on the far southwest point at Maria la Gorda and from there, our hardy band traversed the entire island to the Sierra Maestrae Mountain Range on the farsoutheastern end. We had many unexpected adventures along the way, but getting up and over the Sierra Maestraes required far more than we could have imagined. The map showed a road going across, but when we finally found it,it had gone unused for at least a decade – and surely no Americans had ever been there before (the Cubans living here began following us along the mountainous trails calling us ‘ghost people’). This was an ordeal straight from hell, the subject of another story. We emerged onto the southeastern shoreline late at night in the well-battered van near Pilon. After ‘beaching it’ that night, we drove eastwards past El Mule where Castro had landed in the small vessel m/v Gran’ma to unleash his invasion at the Batista regime. We overnighted in Santiago de Cuba, then headed west into Camaguey (another focal point of climbing Cubans) and back to Havana. 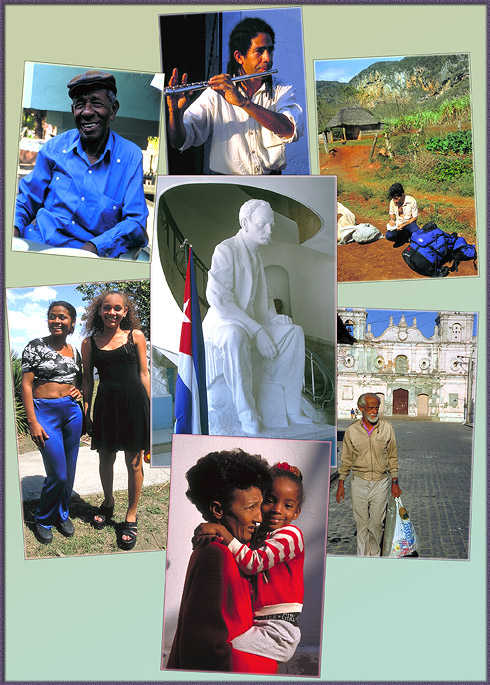 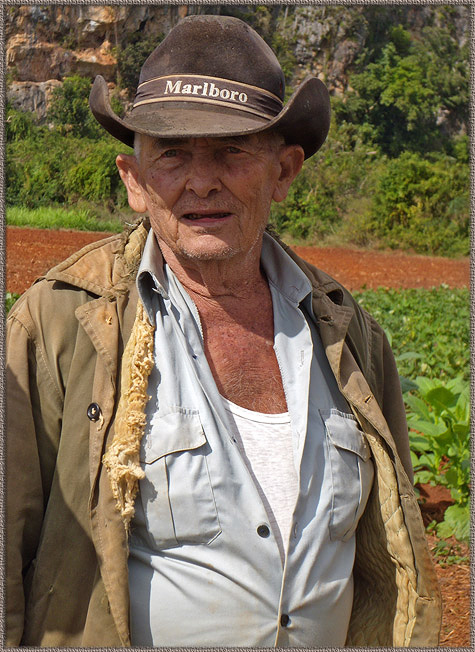 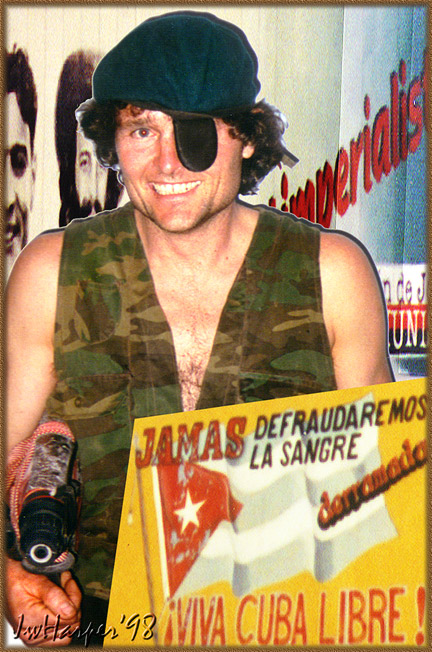 Craig joining in on the prevailing political climate. Hmmm, should we have been there?

By this time, it became apparent we needed to get back to some real climbing! As a warmup, we climbed the walls of El Morro Castle in Havana (shot at left) with several young, enthusiastic Hab 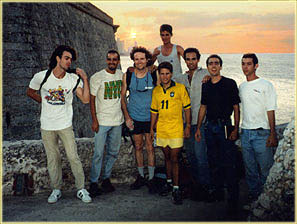 aneros who also took us to a climbing area they had been attempting to develop called Jaruco (see the map). Then, along with several very special Cuban acquaintances including Carlos Pinelo Esplugas, Vitalio “Viti” Echazabal Acosta and his beautiful lady “Nannie”, and Juan Carlos Gonzales Ramirez, we went straight back to Vinales in Pinar del Rio Province. Huge limestone humps called “Magotes” surround the town and many have shear undercut faces literally dripping with stalactites andflowstone, while others have 200′ to 400′ vertical walls sometimes nearly denuded of forestation. We would spot a potential face and had to conduct reconnaissance to determine if it was worth the effort or not. Some were, some weren’t. The shot at right shows the ‘gang’ trooping past fields of melanga, leaving an area we ended up calling ‘The Great Orange Wall of Disappointment’ because, after hours of hacking our way up to its base, it was total choss, unclimbable!! However, in general, we couldn’t have asked for more. We established a collection of routes near the giant cave of El Palanque, about 3 miles north of VINALES (*see below for stories about the ‘original routes). *See photo showing the little village of Vinales and its surroundings. The arrow indicates the El Palanque ‘narrows’ where many of the routes are located). These climbs PLUS many newly developed areas (detailed in the new guidebook “CUBA CLIMBING” – see below) are found on THE MAP PAGE! Routes as long as 5 pitches were put up, many more have been put in since then. For an article about the early development of the area check out Rock and Ice Magazine, Volume 94, October ’99, OR THIS INTERESTING LINK, for more of the story. 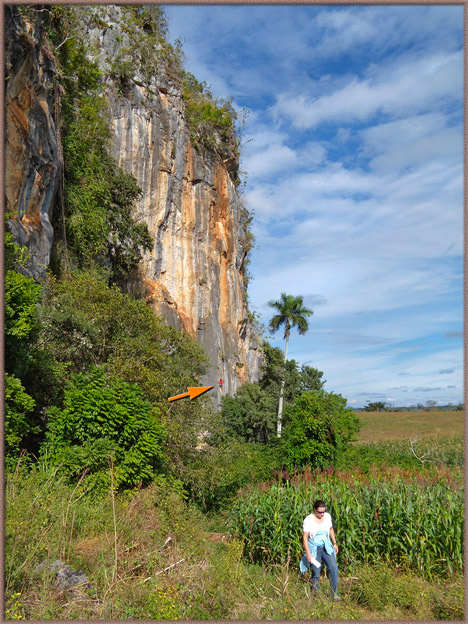 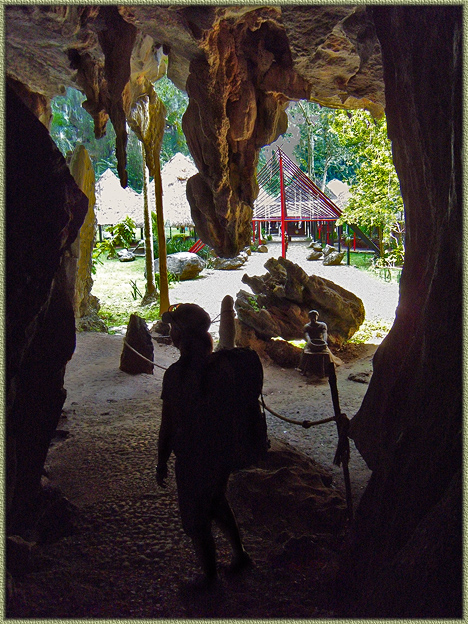 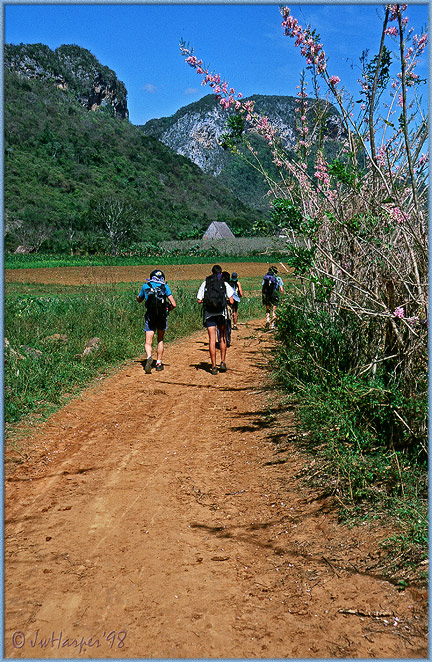 Cuba, the island of mystery, revolt and isolation is a veritable adventureland – with hiking in primitive forests, underground exploration in massive caves, diving, rafting, 100’s of miles of beautiful beaches and so much more. Adventuring is limited only by the shores of the island and the seeming inability of US citizens to travel here. Not to miss out, Europeans have been coming to the island in increasing numbers since the late eighties.

Beyond this, I think it is probably rare that visitors to Cuba, especially those venturing out past the tourist havens, are not moved to a high state of compassion and sometimes even to tears. We were all deeply affected at one time or another. Nearly everything and everyone touches one’s heartstrings. It’s how the Cuban people create so much out of so little, how resourceful they are in the face of abject bleakness. For example, our Cuban friends assembled very functional backpacks out of discarded duffel bag parts (Gregory and Dana take notice!) andharnesses from scraps of webbing. It was these things plus their enthusiastic willingness to help and learn that was so impressive. In getting to know them more completely, it became evident that their strong sense of national pride had been shaped by passionate struggles and a turbulent history rich in conquest, slavery, rebellious dictatorships, bloody revolutions and starvation (both mental and physical). Yet they remain so delightful and open.

Despite widespread adversity and restrictive policies of the totalitarian government, the Cuban people are genuinely friendly and literally captivated by visitors from other lands, especially the United States. No matter where we went, the reaction was the same. It started out with looks of shock and disbelief upon learning we were Americans. “Could it be that this tattered band of rock climbers were actually the nasty, land hungry, rifle-bearing imperialistos from the north that they should be so afraid of”? Obviously not! The initial response was followed by tentative friendliness and quickly snowballed into complete, innocent acceptance and boundless curiosity. I am sure we made friendships that will last a lifetime. It could not have been better. Without doubt, there is a very strong wind of change blowing across Cuba. It won’t be long!! And ……YES, WE’LL BE BACK!!

IN FACT, the local Cuban climbing community has put up many new routes since our first trip in 1998. ALSO climbers from many countries are coming here to help develop routes and to enjoy the unique climbing scene found only on CUBA.

The number of routes has literally exploded !!

These are compiled in a NEW GUIDEBOOK,

a ‘must have’ if you come here.

SEE THIS AND MORE AT WWW.CUBACLIMBING.COM

ADDITIONAL CUBA CLIMBING INFORMATION Today (2010) the climbing scene in Cuba has matured from its infancy in ’97 and ’98 when we were first discovering how vast the potential was. There are now literally hundreds of routes and a new guidebook is out for the Vinales...

”The Flyin’ Hyena Wall“  (4 original climbs, more now) This superb, huge wall is located on the north wall of the Sierra de Ancon Mogote about 2.5 miles past the El Palanque Taverna in a large, 300-foot high cathedral-like cavity. There is a rather primitive lumber...

“Cuba Libre”, 11d, 160′ *See the MAP PAGE for locations ‘Cuba Libre’, also the namesake of a very popular, mind-bending Cuban drink, is climbing on ‘frozen’ flowstone drippings in its ultimate form, a triple decker topped off with a cherry of a roof some 200+ feet off...

CLIMBING NEAR VINALES HERE ARE NOW (AT LEAST) FOUR AREAS OF CLIMBING IN THE VINALES AREA. These are detailed in the new guidebook “Cuba Climbing.” 1.) Areas on Magote del Valle – within walking distance of Vinales. La Yunta, Guajiro Wall, Milenio, Ensenada de Raul,...

Mr. Magote”, 11d, 200 M As sometimes happens, I began to get ‘the itch’ to find new territory one day and ventured up a hillside of broken pastureland and jungle-like terrain located several hundred yards above (towards Vinales ) El Palanque Wall. As I skirted some...