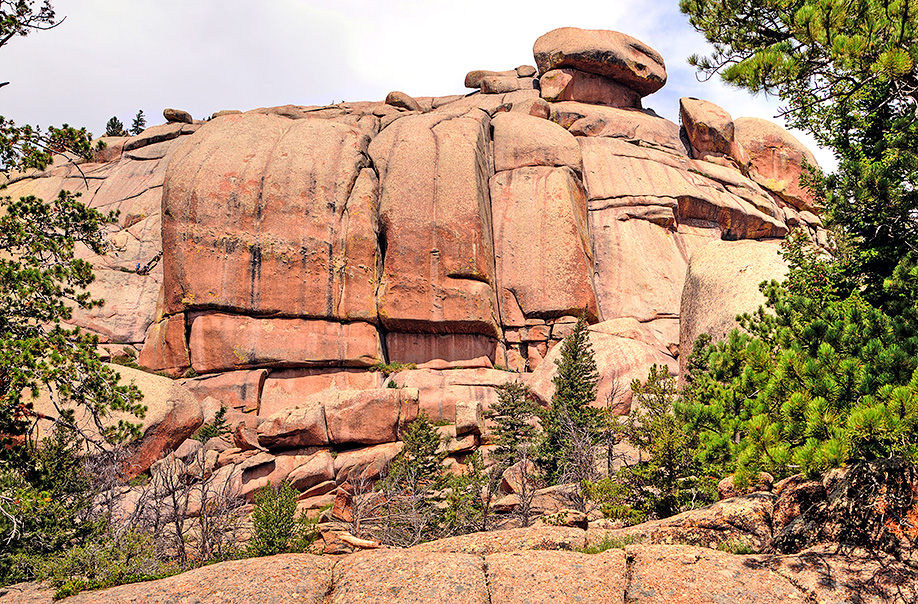 The Coke Bottle is one of three prominent south facing formations of the Central Massif. It gets sun most of the day and it is easily identified as the ‘big bulge’ separating Fall Wall from Walt’s Wall. It’s steep, grooved with large vertical water troughs, embedded with warts of foreign rock (corbels), split by cracks from finger size to ones that can swallow you whole – and, as a general rule, has a gnarly surface. It probably goes without saying that most of the climbs found here kick butt. Some of the climbs are ‘stuff of legends’ and if you can climb them, you may become part of the story too. Silver Salute and Panther of the Weak have seen a mere few free ascents and the second pitch of ‘Panther’ has seen none to date. Maybe this one’s for you! Your hangtime stamina will be tested on ‘Coke Bottle LEFT’ by The Fourth of July and offwidth strength tested by Horn’s Mother (WHO soloed this thing?!). Space Oddity ascends an impressively steep slab on ‘Coke Bottle Right’ while TM Chimney takes you from the bottom to the top of the formation on the ‘inside’ of the rock. That’s contrast, cowboy. Mainstreet, a highly touted offwidth testpiece, is found in the same vicinity. So ask yourself “am I ready for the home of the hardmen”? If so, this place is all yours. 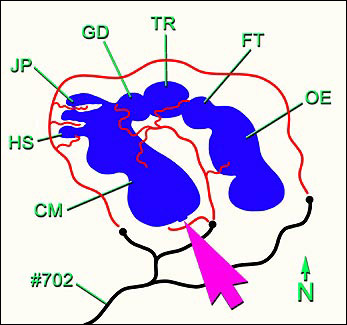 Get out your spurs, dude, or get bucked right off!! 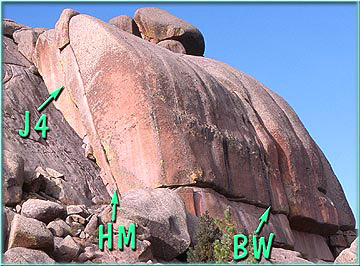 *See beta on two new climbs on the COKE BOTTLE !

1.) Horn’s Mother (HM) 11a It’s what Vedauwoo is all about – one long, wide jammin’ OFFWIDTH mother thanks to J. Horn who did the first ascent on custom wooden pegs and pitons in just over 8 hours in the Spring of 1965. Believe it or not ….. Horn made these wooden ‘pegs’ by grinding sections of old railroad ties and 2x4’s by leaning out the car door and using the highway surface as a sanding device on the way up to Vedauwoo from Laramie. P1: Pull out of a small cave into an overhang on strenuous jams (considered by many to be the crux) and continue into a wide pod with belay anchors. Gasp at the off width highway stretching above you – that’s where you’re going. P2: The crack goes at about # 4 Camalots for approx. 35 feet and begins to slowly taper towards smaller (Ha!) cams, finally narrowing to about 2″ near the top. Take plenty of big pro. You may loose weight from evaporating sweat and blood loss – this is a long haul. Bolts on top. Descend via the Fourth of July Rap or down Walt’s Wall. (ffa D. McClure + M. Hesse, ’73) [See Walt’s Wall Topo # 15]

WHO SOLOED THIS THING ??

I got the call at 3 AM one morning. “I’m ready” …. and he hung up. I alone knew what it meant and premonitory chills ran up my spine. I met Luebben at 5 AM and headed towards Vedauwoo. We didn’t talk much but we both knew what was ahead. I told him I’d go along, very reluctantly, about a month before. HE “HAD TO DO IT” – and I “HAD TO GO ALONG”. God knows I really didn’t want to, but we had seen so much vertical terrain together in the past, it just seemed like I should. We got to the base of the climb and sat in silence, listening to the early morning symphony of soaring birds and prowling winds. When the sun started coming around the corner …. and without saying a thing, he walked over and simply started up – slowly and in total, focused control. While some say the crux is in the first pitch, before the ‘pod’, it isn’t if you are soloing! It’s over half way up that long gaping maw above – and coming to terms with absolutely no means of retreat, no safety measures and much more nasty gash above. I watched thru my telephoto lens as alternating waves of concern and concentration moved over his face … it was gut wrenching! I was scared shitless …… and I wasn’t even climbing! When it was over, I was probably more exhausted than he was from forcing myself to watch my very good friend undertake his deliverance. Hey man, where’s your rope?? You’re not soloing that thing, are you?? Impossible?? We got the shots!!! As usual, whenever he had done something nearly unthinkable (like the FFA of BIG BABY out in Indian Creek), he sauntered up meekly, head down, even acting embarrassed, for what reason I’ll never know. Nothing was said. We just shook hands, shouldered our packs and headed home. It was 1991….. long ago, or was it?

2.) Fourth of July, (J4) aka Hard Promises 12a Next crack over from/left of Horn’s Mother. The first 5.12 freed at Vedauwoo, it begins after the first pitch of Satterfield’s Crack and is sustained and varied jamming all the way. You’ll use your hands like never before. There’s stemming near the bottom and off with near the top. Take a fairly large rack ranging from .5 thru #4 Friends, with some doubles in the medium sizes, and a range of wires. Bolted chains at the top. For the DESCENT, A 50M rope will get you to the first ledge of Walt’s Wall, 2 60’s will get you all the way down. You can also rap Walt’s Wall. (T. Skinner + P. Piana, ’81) [See Walt’s Wall Topo # 18]3.) Satterfield’s Crack The big crack following up the (left facing) huge dihedral corner, described under Walt’s Wall. (J. Sublett et al., ’70) [See Walt’s Wall Topo # 12] 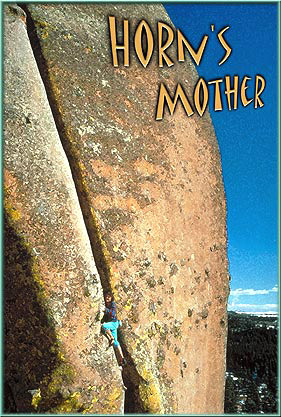 COMMON DESCENT ROUTES: One can descend from most of the fixed anchors, depending upon where you end up. There is a commonly used set of rap anchors above the route Fourth of July, CB Left (one rope to an intermediate station on Walt’s Wall, or a double will get you all the way down). Also common is using the Mickey Mantle Anchors atop the Fall Wall Upper Tier (one rope will get you to the intermediate shelf, two 60’s will get you all the way down to the base of Fallout in the Spider God Alcove). One could rappel the full height of Walt’s Wall using the standard anchors found there. There is a trail leading down the ‘back side’ (NE) of this formation into Box Canyon as well. 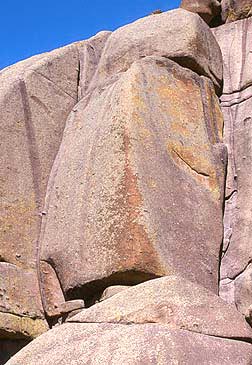 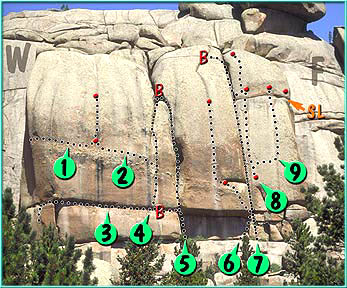 1.) Silver Salute 13b Here’s a Todd Skinner classic that is seldom repeated. Starts in the Horn’s Mother Belay pod (end of first pitch) on coke Bottle Left – get there any way you can. The route traverses out and around the left Coke Bottle bulge on thin edges and natural corbels, meeting up with route #2 at the belay. Only for total honemasters! (T. Skinner, ’91)

2.) Light From Blue Horses 11c In the first ‘rest’ pod above the crux of Boardwalk (about 35′ up in a blocky pocket), a line of bolts traverses left and slightly up along the corbel line to a belay in an obvious large water streak. The bolt line continues up the water streak to another bolted belay. You will definitely see the light. (P. Piana + C. Reason, ’87)

3.) The 12th of Never 10c You’ll be traversing ‘until the 12th of never’. Start on the 5.8 off width of Bell Crack and traverse the entire horizontal off width seam to its left end. Bring lots of big pro and an anti-gravity machine. (L. Kopischka, ‘83)

4.) Boardwalk 11b Superb. Start in the left facing dihedral corner. Climb the 5.8 off with, move out and around the corner on jams to a rest position. Set a hanging belay on gear just right of the bottom of the crack and bring up your second (first shot below). The crux moves, fingers to hands (depending), are within the first 8 – 10′ of the second pitch (photo to right), Silvia Luebben leading), but it doesn’t let up until the blocky pod is reached (about 35′ up). Its great hands from there to the top. Belay on gear from placements about 15′ back in the hallway on the left side (medium cams and wires). Sorenson, ’73.

5.) Bell Crack 11b Same start as # 4, except take the crack directly above the start. The crux is the bulge at the roof (first photo, Luebben leading). It goes hands, off hands and arm bars, very strenuous and requires throw backing to anthropoid ancestry. The huge, flared pod is easier ground but requires some hand stacking to exit (see second photo). The last section is a typical Vedauwoo vertical gutter laced with feldspar crystals – great friction at about 5.9. Can be done in one pitch, but an intermediate belay is recommended if your second is not an ape. Belay same as # 4. (Barber, c ’71).

6.) Panther of the Weak 13a Begins about 10 feet left of Mainstreet and surmounts the right lip of the roof on bolts (placements just over/above the lip). Pull the roof using tricky, hard moves and follow the sparse bolt line up and left along sporadic corbels to the belay anchors at the left end of a sloping shelf under a small roof. The 2nd pitch was bolted years ago, but has yet to see a first free ascent – although many young lions have been mortally weakened who tried. (T. Skinner + J. Valdez, ’92)

7.) Mainstreet 10a Another classic. OFFWIDTH of one size from bottom to near the top. Crux moves are at the obvious bulge about 35′ off the ground. It’s a wide crack hike from there, protected by 2 bolts. There’s a bolted belay at Sphinx Ledge. There’s really three alternative finishes from there, so take your pick: A 5.8 off width crack to the immediate left, a 5.6 crack in the back, or even Mr. Rockbiter, a 5.9+ bolt line that ascends to top anchors directly above your belay. Take a quantity of big pieces. (Mark Hesse, ’72)

8.) The Neverending Story 11a Michael Ende (the story’s author) never expected a journey like this towards his land called Fantastica. Step right onto the face after the crux of Mainstreet and find a bolted belay stance on a shallow corbel. Move straight upwards, first on thin face and then into a shallow water trough with exfoliation edges, some of which are crumbling. Unfortunately, this journey does end at Sphinx Ledge. 7 bolts, Fixe Ring anchors at top. Rap off (two ropes) or continue on one of several options (see # 7 or # 10). (L. Kopischka, ’82)

9.) Revenge of the Nothing 11b The ‘Nothing’ was a mysterious force destroying the land called Fantastica. It might destroy you if you can’t cut the very delicate footwork and miniature side pulls on the traverse into the vertical trough to the right. Ascend the trough on exfoliation flakes and crystals. 12 bolts, Fixe Ring anchors at top. Rap off (two ropes or continue on one of several options as in # 8). Cool climb. (Harper and Duff, ’95)

10.) Mr. Rockbiter 9+ (directly above #8 top anchors) He could eat rock, will you? Not on this super little sport climb found directly above the Neverending Story anchors. 6 bolts. Fixe Ring anchors at top. Getting popular. (Harper and Duff, ’95) 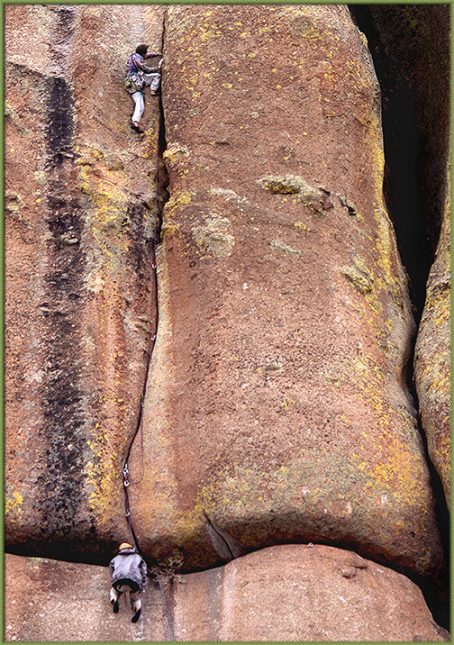 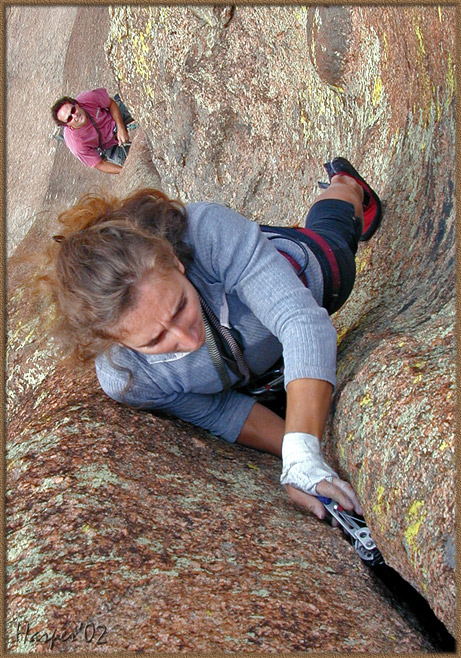 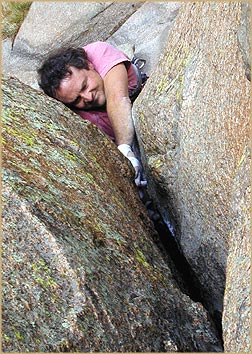 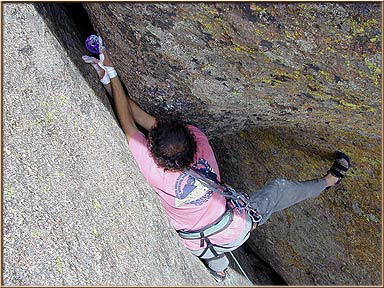 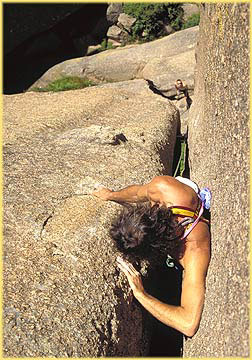